Stellenbosch gets a ‘village vineyard’ 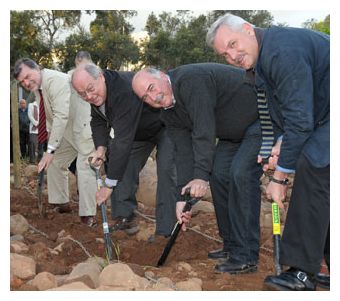 A unique ‘town vineyard’ was planted at the historical Mostertsdrift, home of the Stellenbosch Institute for Advanced Study (STIAS) at Stellenbosch University (SU) on two occasions recently.

On Thursday, representatives of the University, the Municipality, the wine industry, the community and the Institute planted the first of close on 1 000 grapevines on this historic estate in the heart of Stellenbosch during a special ceremony. Representatives included Mr Schalk Opperman, Assistent Director: Planning of SU; Ms Myra Linders on behalf of the Municipality; Prof Hendrik Geyer , STIAS; Mr Beyers Truter, wine industry; and Mr Gawie Groenewald on behalf of residents in the area.

On Saturday, 4 October, the surrounding residents, students in viticulture and oenology, staff of the Department of Viticulture and Oenology and representatives of the wine industry, were given the opportunity to display their vine-planting skills. The day’s activities included a spit braai that was preceded by a demonstration of and short talk on the planting of grapevines. A highlight was a short speech by Prof Roland Perold, son of Prof Abraham Isak Perold – one of the groundbreakers of the South African wine industry.

The aim of the vineyard, on the corner of Marais Street and Jonkershoek Road, is to remind people that Mostertsdrift was initially a wine farm, but also points to new thinking and innovation. The idea is to link the vineyard to the name of Prof Perold.

According to Prof Bernard Lategan, former director of STIAS, the vineyard is a long-held dream that is now being realised. “The planting of the vineyard represents the next phase in the development of the historical Mostertsdrift, which began with the restoration and refurnishing of the old farmstead and the wine cellar as offices for STIAS and the South African Centre for Epidemiological Modelling and Analysis (SACEMA) respectively. This was followed by the building of the Wallenberg Research Centre on the Marais Street side of Mostertsdrift,” explains Prof Lategan.

“However, the experimental nature of the vineyard is also symbolic of that in which STIAS and the Wallenberg Centre believe—to provide a space for creative thinking. Regarding the wine industry, Isak Perold embodied this search for renewal. By creating Pinotage he established the first new cultivar in Africa. We were surprised by the enthusiastic support for the idea of the vineyard that we received from residents, the University, and the wine industry. The Pinotage Association of South Africa in particular, with Duimpie Bayly and Beyers Truter at the helm, immediately offered their active support for the establishment of the vineyard.

“What is of particular importance for STIAS and also for the University is the participation of the Vineyard Academy under the leadership of Mr Henry Horne. The Academy is involved in practical, task-oriented training in the wine industry and plays a big role in providing unskilled farm workers with the necessary qualifications to fulfil their role in the wine industry to their full potential,” added Prof Lategan.

According to Mr Albert Strever, a lecturer in the Department of Viticulture and Oenology at SU and project manager for the vineyard of about 0,35 hectare, the experimental nature of the vineyard is an exciting challenge. “In contrast to traditional vineyards, the vines will be planted in a fan shape so that the action of the sunlight on the different rows can be determined. Although the wine that will be made with the grapes will appear under similar labels, the grapes from the different rows will be kept separate from each other during the winemaking process so that one will literally be able to taste the difference in the wine.”

He added that the trellising system would be unique for the specific situation and type of soil. “The experimental nature of this is also a challenge and, despite the initial criticism, I believe that we are truly going to be breaking new ground. Although the specific type of trellis, the so-called lyre trellis, has already been used on high-potential soils in the wine industry, I believe that the same principles that lead to this system realising high wine quality will also be valid if the soil potential is lower, as is the case here. The favourable canopy area and moderate root competition induced by narrowing spacing between the vine rows are only some of the secrets of this system that lead to its realisation of high production. It therefore is not a conventional decision, but rather a gamble, while still remaining faithful to that which STIAS and Stellenbosch University represent.”

A further innovative aspect of the vineyard is that the soil in which the vineyard is to be planted comes from the Wallenberg Centre, where it was dug out to make space for the centre’s underground parking.” One would not have thought that ground dug out to a depth of 3 metres would be suitable for vineyard, but we were surprised by its quality. Among the positive aspects of the soil are a favourable chemical composition, relatively low clay content, and an immense quantity of shingle that could have a very positive impact on root distribution.”

He added that the situation of the vineyard would probably be better suited to other types of wine grapes, but because of the University’s special link with Pinotage—Prof Perold was a lecturer at the University—the decision was taken to plant Pinotage. “This decision was also received very favourably by the Pinotage Association of South Africa, which played a considerable role in the establishment of the vineyard and also will play a big role in the success of the wine that will be produced here.”

Mr Beyers Truter said at Thursday’s function that the vineyard presents the opportunity to “think outside of the box” and that a number of winemakers will be asked to assist in the wine making process so that the micro climates of the vineyard can be studied (grapes from the various rows will be processed individually). The idea is to not only make Pinotage but also sparkling wine and even Rosé.

The vineyard’s Perold Vineyard Wine will be made by the University at the Welgevallen Cellar at nearby Coetzenburg.

Lelienfontein, a grapevine nursery at Wellington, donated the vines for the vineyard. The vineyard will also be used by the viticulture and oenology students at SU for teaching and research. The project will be managed from an operational point of view by Ms Tinake van Zyl of the Department of Viticulture and Oenology. The first crop of the vineyard should be harvested in about three years and it is expected to produce about 5 000 litres of wine.

More about Mostertsdrift: Mostertsdrift was allocated to Jan Cornelius Mostert in 1683 and registered in his name in 1692. By the end of that century the first wine was being produced on the farm. The property changed hands a number of times until Johannes Gerhardus Delport bought it in 1818 and erected the old manor house in 1820.

The farm later belonged to Abraham Marais. He was the elder brother of Jannie Marais, the benefactor of the University and heir of the adjacent farm, Coetzenburg. Descendants of the Marais family lived on Mostertsdrift until the late 1990s, when the property was purchased by the University. Mostertsdrift was allocated for use by STIAS in 2000. The manor house was restored in 2003 and the wine cellar in 2004, and the buildings were furnished as research areas. Construction of the new Wallenberg Research Centre began in 2006 and the building was taken into use in November 2007.