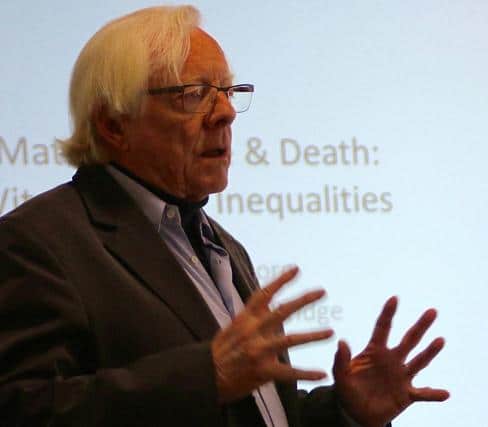 “Talking about inequality in South Africa is a bit like discussing rope in a hangman’s house.” said Prof. Göran Therborn. ”South Africa is currently one of the most unequal countries in the world and, according to its own National Development Plan, will be the most unequal by 2030, unless there is substantial refocusing and change.”

Prof. Therborn is Professor Emeritus of Sociology at the University of Cambridge and Affiliated Professor of Sociology at Linnaeus University, Sweden.  He is also a fellow of the Stellenbosch Institute for Advanced Study (STIAS) and a member of the STIAS Effects of Race project which brings together sociologists, philosophers, writers, lawyers, theologians, psychologists, anthropologists, and educators to addresses major gaps in our knowledge on race thinking and racialism. The project aims to catalyse innovative and imaginative approaches to ‘finding race’ and dealing with the ‘everydayness of race’, in order that the ‘reality’ of race can be eroded. The primary goal is to inform social change through challenging and undermining existing notions of racial difference.

Prof. Therborn emphasised that most discussions on inequality tend to focus on income distribution, however, “inequality is multidimensional and intertwined, with various dynamics”. He described a broader definition of inequality encompassing “everybody’s possibility to realise their human capabilities at a given stage of human social development”.

He distinguished three dimensions of inequality – vital inequality which includes physiological aspects, health and life expectancy; existential inequality which considers human dignity, autonomy and the treatment of persons; and, resource inequality which encompasses material and economic aspects as well as access to natural resources like water and air.

Mechanisms of inequality include distanciation, exclusion, hierarchy and exploitation, whereas those of equalisation include approximation, inclusion, redistribution and affirmative action.

The different types of inequality go through periods of increase and decrease globally and nationally depending on events such as the abolition of slavery, the industrial revolution, wars, conflict, epidemics, and economic upswings and declines. “The world is not continuously going to the dogs,” he said.

However, major events have huge impact. For example, Prof. Therborn pointed to the early days of the “AIDS catastrophe as causing the most devastating rise in mortality and therefore increased inequality since the Plague.”

For individuals, the different types of inequality can change over the course of a lifetime. “Stations of possible redress include education, marriage, entering the labour market,” he said. “Resource inequality is characterised by the accumulation of advantage and disadvantage; existential inequality is strongly influenced by place and historical time; while vital inequality may cumulate over a lifetime and is difficult to redress.”

“Both advantages and disadvantages may reproduce over many generations,” he added.

“Child and infant mortality rates in a country are obviously major determinants of life expectancy.” he pointed out. “However, in addition, poorer mothers often give birth to low birthweight or stunted babies who may face long-term physiological and cognitive health effects.”

“Under apartheid, South Africa was clearly one of the most unequal countries in the world in terms of existential inequality in particular. This has improved since 1994 due to the Constitution, and increased gender and land rights. However, the other inequalities – vital and resource – have certainly increased for many.”

“Even the government’s system of social grant cash transfers – although they have had some success in alleviating extreme poverty have not had much impact on overall poverty.” He added that “the evidence suggests that giving such transfers to women is more successful.”

Prof. Therborn pointed to improved health services and education as the most important aspects to turn the tide of all three types of inequality.

“What is also needed is an honest, hardworking, austere political elite which sets an example for the rest of the population,” he concluded. “It’s important to move away from a money-grabbing image that says all plumb jobs and contracts are up for grabs by any means.”