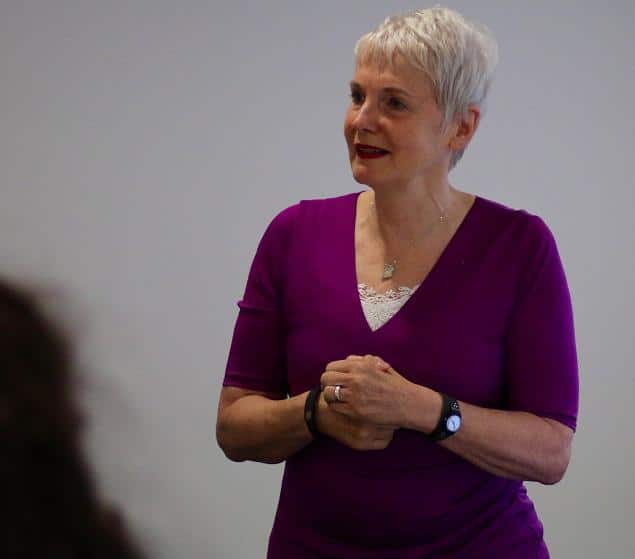 “Sign languages are also not derived from spoken languages. Each sign language is codified and has its own rules and conventions, its own grammar and a complex lexicon,” she added. “There can be different sign languages within the same country.”

Sign languages vary in how much they are used in different domains. “Once a sign language has official government recognition in a country, it enters different domains (like the Courts, for example) and then institutions may be tasked with developing specific, new vocabulary. New vocabulary tends to first be spelled manually until a sign has emerged but it is a process that comes from the community.”

Understanding the milestones in sign language acquisition provides important information. “Babies (hearing and deaf) seem to be able to produce manual signs before they can produce spoken words. We need to understand if this is true and what it means,” said Dr Baker. “In babies the first signs usually appear around eight or nine months but this is probably connected to motor control of the arm muscles developing sooner than the finer motor skills required for speech.”

In her work she has not found evidence that sign languages are the earliest language acquired. “Patterns of dominance from the mouth or hand have also not been found,” she said. “There appear to be similar stages and timing to development in a spoken language – including the acquisition of multi-sign combinations from about the age of two years.” Children seem to learn to distinguish features and phonological parameters (like handshape, place of articulation, movement and orientation – all of which change meaning) at similar stages to those at which they distinguish sound categories.

Of course, learning a sign language also requires a different form of visual attention. The signs have to be visually accessible and adults talking to deaf children use various attention strategies to ensure the child sees the signing. The child has to learn to give visual attention to the signing adult and can perceive around 80% of his/her signs by age three. “There is a complex visual attention pattern,” said Dr Baker. “This is something that hearing parents with deaf children often find hard and it usually needs training. The attention factor needs to be included in models of sign language acquisition, but also of spoken language acquisition.”

Dr Baker also considered whether iconicity (the relationship between meaning and form) in signing helps learners. Iconicity is found in about 60% of signs and occurs in spoken languages too. “We have found that deaf children don’t necessarily make their early signs more iconic probably because their world view and knowledge is limited, so iconicity does not seem to help them,” she said. “However, hearing non-signing children learn iconic signs better and adult second-language sign language users rely heavily on iconicity.”

A unique feature of sign languages is that they can be produced at the same time as speaking. “All deaf people are bilingual to a degree,” said Dr Baker, “therefore codemixing is to be expected.” However, the codemixing is more code-blending. Deaf mothers use a great deal of code-blending with their children. “Young children learning a sign language produce this code-blending but its form is affected by hearing status. The hearing children of deaf parents also code-blend – but in a different way to the deaf children,” she added.

Dr Baker pointed out that there are an estimated 600 000 users of South African sign language. “Six out of a thousand children in South Africa are born deaf as opposed to one in a thousand in Europe. This is due to a mix of factors including lack of genetic counselling, hygiene and childhood illnesses.

Cochlear implantation is also not common yet in South Africa mainly because of the financial burden but also because there is not generally accessible assistance and training. The role of South African Sign Language is therefore crucial.”