“There is a huge need to develop technologies that can be used in less-resourced settings. This treatment should not require a sophisticated surgical setting. It should also be cheaper than other treatments,” said Mazin Sirry of the Department of Biomedical Engineering, University of Medical Sciences and Technology, Khartoum, Sudan. Sirry, who is a STIAS Iso Lomso fellow, was presenting an update on his project which uses computational modelling to investigate the effect of optimising the injection timing of biomaterials to repair damaged cells after heart attacks. 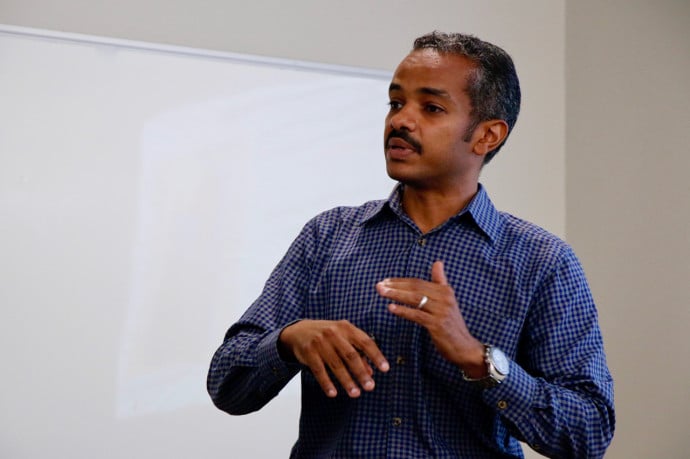 “Myocardial infarction (MI), commonly known as ‘heart attack’, is one of the major causes of death globally,” he said.

Sirry explained that MI is usually caused by a blockage in the coronary artery when fats are deposited leading to a blood clot. As a result, the muscle may become damaged, lose its ability to contract and the overall ability of the heart to pump blood is extensively reduced.

“Unfortunately this damage is irreversible,” he said. “Over time after a heart attack there are structural changes to the heart. The chamber can dilate associated with thinning of the heart wall. It can also stiffen like scar tissue. The affected region expands. This can lead to heart failure when the heart is no longer able to contract.”

“We have to look at how to restore the damaged area.”

Current therapies include drugs, balloon catheters, meshes and stents which prevent the narrowing of the coronary artery and assist in the pumping process, as well as bypass surgery in which a leg vein is used to bypass the damaged region.

“Heart transplantation is obviously the golden solution,” said Sirry. “But is problematic due to the low number of donors and the possibility of rejection. It also requires sophisticated, specialised surgical settings.”

There is therefore a need for novel therapies and much of the work in this area has focused on cell delivery – injecting healthy cells into the damaged region.

“Such therapies have shown good outcomes,” said Sirry. “Injection of these cells can significantly reduce the infarct sizes.”

However, the research has also shown that just injecting the biomaterials (used to carry the healthy cells) alone also improves cardiac function and can prevent wall thinning.

“A 2006 study demonstrated that cardiac function might potentially be improved just by increasing the thickness of the ventricle wall by the use of biomaterials,” said Sirry. “In 2009 a research group at the University of Cape Town developed a synthetic polyethylene glycol hydrogel which on its own showed good results in preventing the adverse ventricular remodelling.”

“Biomaterial injection into the heart muscle is therefore an emerging treatment for MI. Yet, it has not been fully optimised,” continued Sirry. “The mechanical aspects of the treatment have attracted great interest in the research community due to the alterations in cardiac mechanics induced by the biomaterial injection. Computational tools have been found to be very useful in investigating these aspects.”

One of the issues that remains unclear is the effect of the timing of the injection of the biomaterials – whether this should be immediate or delayed for greatest impact. Sirry and his colleagues are therefore investigating the effect of injection timing on the injectate morphology utilising micro-computed tomography image data of rat hearts.

“Computational modelling involves using computers to model and simulate complex systems,” he said. “It’s a relatively cheap, safe and ‘friendly’ research option which can play an important role in the advancement of these possible therapies for myocardial infarction.”

“We are hoping to understand the underlying mechanical aspects at a microscopic scale – looking at questions like how much to inject, where to inject, whether to inject in only one place, and, especially, the optimal timing of such injections.”

“This is partly because over time the body gets rid of dead tissue creating a voided area into which the gel goes. We are now hoping to use models to answer if this shape makes any difference.”

The initial work has shown the feasibility of the model and the method. The group hopes to move forward to study the therapeutic effect on a microscopic scale.

“My students are all looking at different aspects – all based on computational mechanics.”

“The work has also shown that such models can provide useful information for multi-scaled investigations,” said Sirry. “So you can also study the mechanical environment of how cells behave if you inject cells in addition to the biomaterials.”

“This is a highly interdisciplinary research problem,” he continued. “The heart is unique largely due to its ability to self-contract. It’s a dynamic, complicated environment.”

“This work is in the initial preclinical phase. There is a long process ahead to move through clinical trials – it would take a minimum of 10 years for any potential treatments to reach the market. In the meantime we have to continually emphasise prevention of heart attacks by promoting healthy lifestyles.”