“Make your money fight!”: examining the effects of patriotic thrift during and beyond the Second World War – Public lecture by Carol Summers

“In the British world of the 1940s, saving money became patriotic,” said Carol Summers, holder of the Samuel Chiles Mitchell/Jacob Billikopf chair in History, Professor of History and Global Studies at the University of Richmond and STIAS fellow. “During the war, savings campaigns mobilised the people of the British Empire and commonwealth, whether men, women, or children, to make public, individual investments in the war effort. They bought bullets, boots, bombs, planes and more, and by the end of the war had (cumulatively) accumulated millions of pounds in war bonds. Nor was this initiative limited to the UK—it extended to the Empire, with special issues of war bonds in places as far flung as New Zealand, Uganda and Canada.” 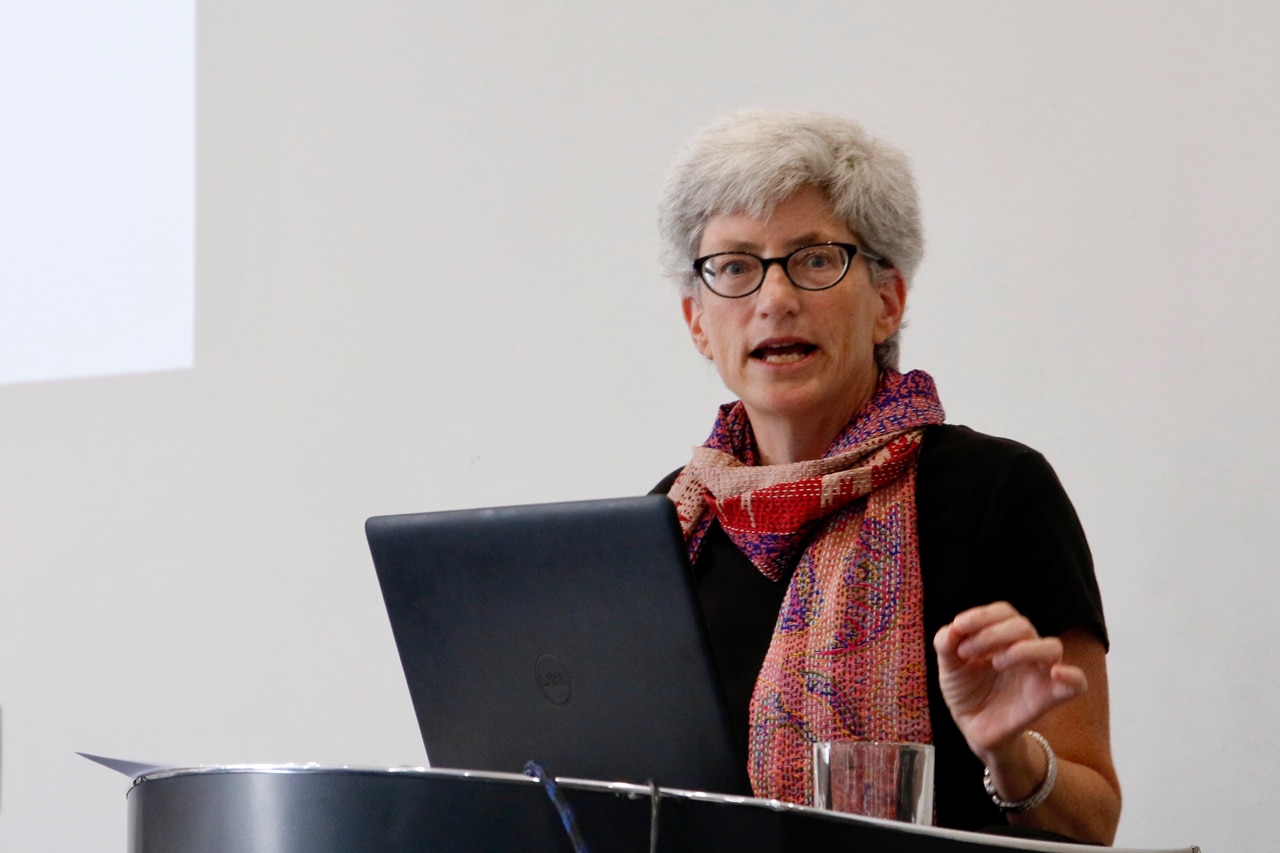 Summers was presenting a public lecture on her comparative history project which explores thrift and citizenship in the British world of the Second World War and its aftermath.

“This project began with a scrapbook of Ugandan savings propaganda in Uganda’s National Archives, and then grew,” she said. “Uganda is a long way away from Europe and not normally thought of as a contributor to the war effort. I therefore started to question why they would try to convince people that lending money to the British Empire would give them future security? What could they earn by investing their money in the British Empire’s ability to win the war? It hinted at a bigger story about loans, investment and the link with citizenship – what a citizen is owed and what a citizen owes their country. It also offered a glimpse of the war through an African lens.”

“As soon as I started looking in the British archives, I discovered a gold mine,” she added. “It’s a project that starts with small observations and builds from there as I start to realise the implications of those small things.”

“My research to date suggests that savings, along with education in thrift, was part of imperial identities during the war, and continued afterwards in a context of British austerity as financial education taught the perils of inflation, consumption and immediate gratification, and emphasised the civic individual and collective virtues of thrift,” she said.

Summers pointed out that the idea of a National Savings Committee in Britain started in the context of the First World War which many Britons considered to be a disaster – “badly funded and causing massive indebtedness which contributed to the Great Depression”. But by that war’s end, 17 million Britons had war savings. That part was recognised as a success.

From 1939 the Committee launched a massive propaganda machine to motivate and organise Britons to save. It collected money, sold savings bonds and by 1945 collected approximately 11 billion pounds in war savings, including around four billion from small investors.

“The Committee communicated the idea that you could be a citizen, help to win the war and, at the same time, transform your life.”

“The propaganda was extremely blunt,” continued Summers. “It was all about letting your money fight and defending the right to be free. It targeted everyone with the aim of changing the citizenry from consumers who take away from the war effort into savers, investors, people with a stake in the war and victory – even if they could only afford a few pennies a week. People saw the prices for weapons. Propaganda showed the impact of bombing. Organisations published precise records of who pledged what during fund drives.”

Britain’s savings campaign was extremely well organised and morally coercive – active in the schools, in churches, workplaces and civic organisations. Street committee heads visited each household collecting money and shaming those who did not contribute.

“By the end of the war the propaganda shifted to the rhetoric of building a new kind of domestic future, post-war prosperity and the idea of avoiding being a ‘Squander Bug’ by transforming consumer spending into savings. Moral people saved. Those with the spending disease risked lives.”

“The message was that the victory achieved could be taken away.”

Summers has also looked at the situation in Canada.

“Canada was the banker of Britain, offering Britain support, including the early ’Billion Dollar Gift’ before the Americans joined the war. Canada drew on taxes to fund the war, but also collected through a savings campaign modeled on Britain’s.”

The Canadian approach was more of a public-private partnership and made extensive use of radio and business sponsorships. It sought to harness Canada’s rapid economic growth as a wartime producer, encouraging newly prosperous workers to invest rather than spending their money on consumer goods.

The Canadian campaign presented images of a scary world, in which Canadians could save themselves and earn freedom through disciplined savings. Savers could become Canadian with savings stamps, certificates and victory bonds that supported the allies’ efforts. Even indigenous people who lacked individual economic rights could invest in war bonds and claim Canadian identity. Women and children also invested, acquiring savings in their own names, rather than under the guardianship of husbands and fathers. War savings thus offered new kinds of money-based identities and rights.

Summers pointed out that in Ugandan these ideas of rights and citizenship proved more challenging. Initially Ugandans contributed to the war effort with gifts and donations. But from 1943 onwards Britain took money from the colonies more systematically, drawing down any surplus balances from the protectorate’s budget, from ’Native Treasuries’ and from the Cotton price stabilisation funds as war investments. Individuals in Uganda, too, became part of global efforts targeting anyone in the colonies who had the ability to save, with detailed propaganda on post office savings and East African War Savings Bonds.

“By the end of war the governor described Ugandans as having saved ‘quite abnormally’ during the war,” said Summers.

However, the patronage savers offered Britain over the war period engendered expectations which were not always met. The post-war period in Britain was characterised by the development of a substantial social services infrastructure while in Canada the economy boomed. In Uganda, though, the protectorate’s resistance to change led to disappointment. This manifested in a strike for war bonuses in 1945 and ongoing political mobilisation to the end of the decade that increasingly voiced a desire for Ugandans to be heard and shape the country, rather than continuing to defer to their debtor, Britain.

Summers continues to examine possible links between Ugandans’ status as imperial creditors and thus owners of the Empire’s victory, and the subsequent formation of political independence movements which shifted from asking for rights within the Empire to asking for independence from the Empire.

“Wartime savings emphasised ideas of what it meant to be civilised citizens in the colonial era. As successful savers, people felt they had been promised freedoms and citizenship.”

“War savings initiatives contributed to ordinary people’s transition from being subjects of the Empire and commonwealth to Britain’s creditors. As such, they were citizens who were told that their investments in war savings gave the Empire the ability to win the war. The propaganda emphasised that investment in war bonds would lead to moral ownership of victory, rights and post-war dividends. Within this effort, people across the British world invested for victory, citizenship, and a future. Buying rights and owning citizenship, though, proved complicated.”