At his seminar at STIAS, James Ocita presented an overview of his project which he envisages as a book monograph. His project, pitched as a postcolonial spatial reading of the Western Indian Ocean imaginary, interrogates how such a reading reveals the unevenness of the various cultural terrains that subjects navigate, and what space reveals about the history of its own evolution. Ocita stressed that postcolonial spatiality is not an alternative to historiography but a useful complement. 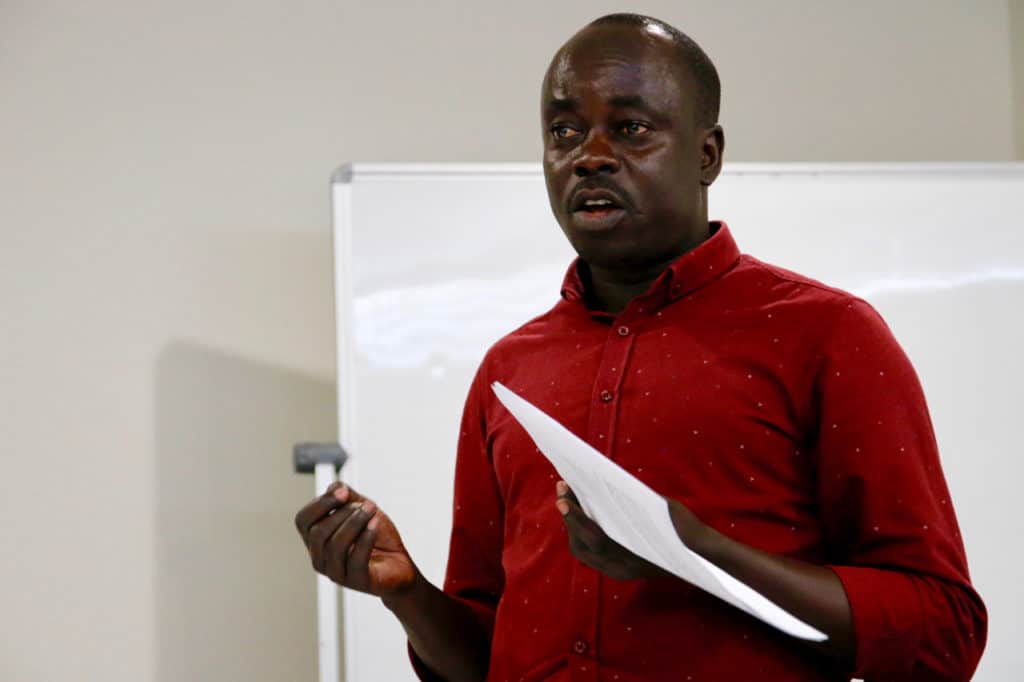 “My reading marks a shift from the designation of space as a cartographic act to its conceptualisation as a cognitive act. Foregrounding spatiality is, for me, a significant theoretical departure in this project,” said Ocita of the Department of Literature at Makerere University, Uganda. Ocita is an Iso Lomso fellow at STIAS and was presenting information on his current research which looks at literary works emanating from the Western Indian Ocean imaginary – colonial British East Africa, comprising Uganda, Kenya and Tanzania.

“Postcolonial Western Indian Ocean novels plot the circulations of marginal subjects in national, transnational and global spaces, offering provocative perspectives on how various subjectivities are produced,” he said. “However, despite the explicitness, omnipresence and centrality of the spatial experiences, processes and designations that these novels represent – e.g. mobility, home(-making), homelessness, belonging, alienation, displacement, relocation, exile, diaspora, transnationalism, etc.; and spatially-explicit dualities such as coast and interior, local and global, home and abroad, domestic and public, etc. – critical engagements with them have made little attempt to theorise the idea of space as part of the effort towards a more productive reading.”

“The focus, beyond privileging temporality, historicity or narrative sequence, has been more on place/location/locality as specific, more immediate signifiers than on space broadly as a generic source of signification,” he added. “My study seeks to explore how mobility and space-making determines subjectivity to advance a better understanding of engagements in national and transnational spaces and across the global cultural terrain.”

The work is an extension of Ocita’s doctoral studies completed at Stellenbosch University which he is revising into a monograph. The study involves a historiographic reading of Indian narratives from East Africa and South Africa published between 1960 and 2006.

“I was initially tickled by what was happening in Stellenbosch at the time I was doing my PhD, particularly around the ‘Location and Locution’ lecture series,” he said. “The idea of ‘Thinking Africa from the Cape’ provoked me to reflect more critically about location of enunciation – where the novels I am analysing are narrated from.”

Ocita reads evocations of Africa – other than specific nation-states – as the more meaningful analytical category and a decolonising act of unmapping the arbitrarily demarcated continent. He describes the Western Indian Ocean imaginary as a cohesive regional entity forged by the centuries-old convergence of the African, Asian and European cultural streams. The Indian Ocean system, he said, emerged out of cultural exchange involving the East African coast, the Gulf, the Far East, and the Indian sub-continent. British colonialism across these regions in the late nineteenth century provided the catalyst for regional unity. He has thus far specifically explored literary works by African writers of Indian descent who construct the experiences of Asians/Indians in this area.

“Diasporic Indians have often been perceived as an alien presence, insular and economically dominant. As such, nationalist discourses have often represented them as threats to national stability,” he said. He explores the works of Indian writers as “counter-narratives that provide more nuanced accounts of the Indian presence in the region”.

Ocita reads these narratives as structured by tensions between filiation and affiliation – between cultural and political identities or what it means to be Indian/Asian or its various shared subgroups (Tamil, Ismaili, Gujarati, Goan, etc.) and Ugandan, Kenyan, Tanzanian, or South African. The narratives, he said, often represent ways of asserting both political and cultural identities simultaneously as part of self-authentication activated by ideologies of inclusiveness in post-independence or post-apartheid citizenship.

Ocita is also interested in the implications of the circulations of mobile subjects between postcolonial locations on the continent and imperial metropolises of Europe, the United States and other white settler countries. He highlighted the limitations of postcolonial, globalisation and diaspora theories, applied singly, to offer satisfactory accounts of the experiences of mobile/marginal subjects in these transnational and global circuits. Foregrounding spatiality, he intends to deploy what he calls a triadic theoretical framework that interrogates the intersection of these three theories.

In discussion, he acknowledged the importance of the language of publication, alternative ways of home-making, the influence of who is publishing the works, where they are published, the impact of trauma on writing, as well as the need to take into account regional aspects within the categorisation of diaspora or national groups.

Reflecting on the scholarly contribution of his study, Ocita noted: “By shifting from the designation of space as a cartographic act to its conceptualisation as a cognitive act, my reading revisits theorisations of postcolonial spatiality to decode how various ideas of space function metonymically and metaphorically as abstractions of subjectivity in ways that reveal multiple structures of domination and subordination, and the unevenness of the global cultural terrain.”