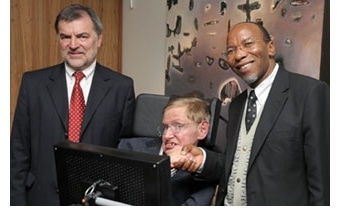 The National Institute for Theoretical Physics (NITheP) in South Africa received the “strong and enthusiastic support” of famous theoretical physicist, Stephen Hawking, at its opening at the Wallenberg Research Centre at STIAS on Tuesday.

Prof Hawking, who suffers from motor neuron disease and communicates using a sophisticated computer system, was not part of the list of speakers, but he surprised all with his attendance as well as his statement of support to the Institute. He said, with the aid of his computerized voice, that the Institute will allow local physicists to interact with scientists from overseas and that NITheP will train future African theoretical physicists.

The Minister of Science and Technology, Mr Mosibudi Mangena, who spoke directly after Prof Hawking, said some might wonder how South Africa, as a developing country with so many pressing infrastructural and social needs, can afford to invest money into supporting theoretical physics. “The answer simply is – we cannot afford not to. We must develop people with critical and analytical thoughts.”

Prof David Gross, Nobel Prize winner for Physics and Director of the Kavli Institute for Theoretical Physics in Santa Barbara, USA, was the guest speaker at the function and delivered an enthusiastic presentation on string theory.

The establishment of NITheP was announced in 2005 by Minister Mangena in 2005. NITheP is a geographically distributed institute which also has regional centres at the Universities of KwaZulu-Natal and the Witwatersrand. It is being positioned as a national and African user facility for theoretical physics and will provide theoretical underpinning for current national programmes including astrophysics, cosmology, nuclear and particle physics, quantum technologies, condensed matter physics and quantum optics.

The launching event will be followed by a three day workshop co-hosted by AIMS, NITheP, STIAS and the Newton Institute at Cambridge. It will focus on international developments in theoretical physics and on state of the art cosmology in particular. This event and the subsequent research programmes at AIMS and NITheP, which will include a focus on cosmology, are seen as significant developments in South Africa’s science programme in general, and for its cosmology and astrophysics programmes in particular.

Prof Hendrik Geyer, Interim Director of NITheP, described his experience of the opening of the Institute as such: “The opening ceremony of the National Institute for Theoretical Physics at STIAS built the best possible platform from which NITheP can go further. The fact that Stephen Hawking was in attendance and added his voice of support to the many other personal messages of support, including that of Minister Mangena and the Nobel Prize winners David Gross and George Smoot, leaves no doubt that the government and the international community takes NITheP’s entry into the family of similar institutes worldwide very seriously. It made years of dreaming and hard work, and one day of sweating, worthwhile twice over!” Caption: Prof Stephen Hawking, world-famous theoretical physicist, was one of the guests attending the opening of the National Institute for Theoretical Physics (NITheP) at the Wallenberg Research Centre at STIAS. With him is Prof Hendrik Geyer, Interim Director of NITheP (left) and Mr Mosibudi Mangena, minister of Science and Technology. (Photo: Anton Jordaan, SCPS)