STIAS publication on xenophobia traces ‘how the SA dream faded’ 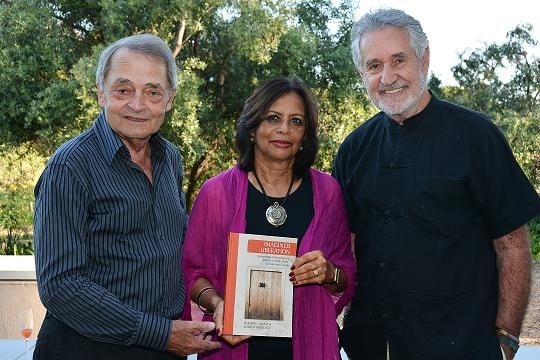 Heribert Adam, Kogila Moodley and Breyten Breytenbach with a copy of Imagined Liberation.

What are the causes of xenophobia, and what does hatred of foreigners in South Africa say about the state of democracy in this country 20 years after its inception in 1994?

These questions are at the heart of a new book, Imagined Liberation: Xenophobia, Citizenship and Identity in South Africa, Germany and Canada, by sociologists Heribert Adam and Kogila Moodley. Published by SUN PRESS, it forms part of a series of publications by the Stellenbosch Institute for Advanced Study (STIAS) and was recently launched at the STIAS Wallenberg Research Centre.

Introducing the authors and the background to the series at the book’s launch STIAS Director Prof Hendrik Geyer stated that “STIAS has a clear vision to promote research at the highest level on issues of the highest relevance, ” adding “We cannot shy away from difficult topics. And we have a duty to disseminate this research to the broad public.”

Adam and Moodley are STIAS fellows – he is Emeritus Professor of Sociology at Simon Fraser University in Vancouver, and she Professor Emerita in the Department of Educational Studies at the University of British Columbia. Most of the research and writing for their book took place during three visits to South Africa from 2011 to 2013 while they were resident at STIAS.

“Imagined Liberation traces how the dream of in inclusive, non-racial democracy faded in South Africa,” the authors say in their introduction. This is reference in part to the prevalence of negative attitudes in this country towards migrants from the rest of Africa, and in part to the turn that political developments at the continent’s southern tip have taken the past two decades.

They use xenophobia “as a prism for South African society at large” and by analysing the spectrum of attitudes displayed, they “attempt to capture revealing aspects of the current collective mindset, 20 years after the abolition of legalised apartheid.”

They explore xenophobia “empirically, comparatively and theoretically,” covering first base with ethnographic interviews with Grade 11 and 12 learners in Khayelitsha.

“‘What do foreigners contribute?’ was one of the questions we asked,” Moodley recounted at the launch.

“Some respondents emphasised their abilities – that they ‘have skills’, ‘can fix things’, ‘work together to secure goods cheaply’. Others considered them a burden – they ‘steal our women’, ‘peddle drugs’, ‘don’t pay taxes’, ‘kill babies’ and ‘sell body parts’. This was very reminiscent of how anti-Semitism and other forms of racism work.”

Prejudice against foreigners from elsewhere in Africa is not confined to the poor. Moodley used the example of a senior politician saying how deeply concerned the government is about the fact that whenever they go to a restaurant they are served by foreigners.

“What about the new human rights culture of a progressive constitution? How could victims of apartheid so easily become victimisers? That is what we wanted to know,” Moodley explained.

“There are two answers in the literature – that the country’s apartheid past is a root cause of xenophobia, and that the many deficits of the post-apartheid state are key causes of the problem.

“Clearly past habits where ‘surplus people’ were edged out in the land of their birth do not simply disappear. It is not difficult to see how these patterns persist and can recur. In the post-apartheid era, massive deportation of foreigners took place.

“But anchoring the new xenophobia in the past doesn’t explain the specifics of the recent violence towards amakwerekwere in South Africa. Also, how can one explain xenophobia in societies without an apartheid past?”

The authors argue that the ANC, “a once glorified liberation movement”, started losing its moral compass once it came to power. As “moral turning points” they list “the HIV/Aids denial, the continuing high crime rate, the corruption crisis and waste of public funds in the controversial arms deal” and “re-racialisation through black economic empowerment.”

Analysis of South Africa forms the mainstay of the book, but the other two countries mentioned are given substantial attention as well. In the case of Germany, the treatment of asylum seekers and Islamophobia are highlighted, while Canada is held up as a model for enlightened immigration policies due to the fact that cultural diversity is for the most part celebrated in that society.

According to the writer Breyten Breytenbach (pictured above with Adam and Moodley), who delivered the keynote address at the launch (a copy can be downloaded here), “the merit of the book is that it reminds us of the imperative of hospitality and of encompassing differences in background and in origin.”

This book is a timely contribution to public debate as South Africans prepare to go to the polls for the fifth time since the country’s political transition – with “many former anti-apartheid activists” having become disillusioned and “others still imagining liberation through outdated policies.”

For Adam and Moodley this work is more than just another research project. The two had met in Durban in 1966, when Moodley was a lecturer at the then University College for Indians (later the University of Durban-Westville, now part of the University of KwaZulu-Natal), and Heribert was a visiting scholar from Germany. They fell in love, but their relationship fell afoul of the Immorality Act. Moodley was fired from her job and Adam banned from South Africa. They got married in Germany two years later.

For them, the book in effect synthesises their 50 years of academic involvement in South Africa.

* Imagined Liberation: Xenophobia, Citizenship and Identity in South Africa, Germany and Canada is published by SUN PRESS, an imprint of AFRICAN SUN MeDIA. It may be ordered directly from www.sun-e-shop.co.za at a cost of R275, or R220 for the e-book.