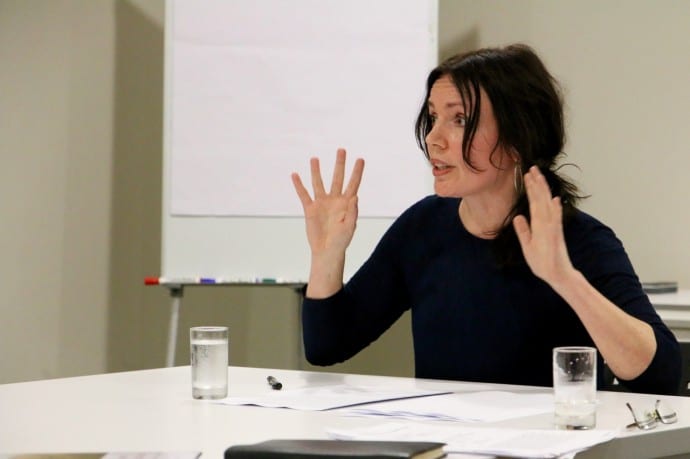 “Democracy is an unfinished project, constantly reforming itself. Always in crisis and reinventing itself under novel conditions,” said Sofia Näsström of the Department of Government at Uppsala University, Sweden. Prof. Näsström is currently a fellow at STIAS where she is working on a book entitled The Spirit of the People: Thinking Democracy beyond the Nation-State.

The book will look at the generally accepted definition of democracy as rule by the people or collective self-government to examine whether this has ever truly applied and can realistically apply in a changing world with ever-increasing universal challenges like globalisation, multi-culturalism, conflict, migrancy and climate change in which political decisions travel across borders and time.

“The purpose of the book is to show that this familiar interpretation confuses democracy with a republic, and thereby fails to capture what is unique about the political project set in motion by the revolutions in the late eighteenth century,” said Näsström.

“Modern democracy is not based on a given body of people,” she continued. “It has no particular people. It is a form of government made up of actions and institutions, and these actions and institutions carry certain ‘principles’ of commitment in Montesquieu’s sense of the term, or guiding ideas that together make up the spirit of modern democracy, or what I call the spirit of the people.”

Democracy is based on a commitment to three principles, responsibility, equality and freedom, and these principles have to be materialised in laws, institutions and policies in order for a democracy to be able to sustain and recreate itself over time.

“I’m hoping to undertake a critical reflection of our own democratic imagination,” said Näsström. “I believe we have confused modern democracy with Republicanism, and this traps us in a number of false dilemmas. We have to disentangle democracy from nationhood.”

Näsström believes that democracy and republicanism can successfully co-exist but that when nationalistic principles take over they sometimes lead to corruption of democracy.

“If we consider attempts to defend democracy against migration, for example, we have to ask ourselves: Does defending a specific national body of people also mean that we defend democratic practices and ideals? Or does it rather boost nationhood at the expense of democracy?”

“Similarly, we have to raise questions about the widespread impatience with democracy in relation to global political affairs. We are often told that democracy faces a ’hard choice’ between democratic legitimacy and efficacy, and yet we must ask do we really have to surrender democracy to solve global, cross-border problems like climate change?”

“The paradox of democracy is that the people are its legal source but when you have conflicting claims and the boundaries of the people themselves are the object of discussion, you can’t appeal to a given people for resolution. You need to start negotiating across competing claims: who are ‘we, the people’?”

“People are not just the source but also the objects of democracy,” she continued. “We need to consider who has the right to make decisions and laws.”

No democracy as usual

The book will ask three main questions – what do we mean by democracy as a spirit?; what is needed to sustain it?; and, how do we know it is being corrupted?

“No one owns democracy,” said Näsström. “It is classless and open to debate.”

“The gap between the rhetoric and reality of democracy is increasing. I think there are distorted beliefs about what democracy is,” said Näsström. “Everyone is a democrat but many don’t have the means to exercise it.”

“For example, if we look at the criteria that countries use to confer citizenship, these are often based on economic and market principles – to be a citizen you have to have money, education and marketable skills. How does that foster democratic integration of newcomers?”

“I’m not aiming to idealise democracy but rather to understand the realities of what is already there when we talk about democracy which, of course, is different in different countries,” she said.

“Democracy is an unstable institution. Crisis and change is a recurrent theme in democracy and yet it has survived,” she continued. “Modern democracy is not an end state – it is a verb, a process and we don’t know where it ends – but what is clear is that we can’t do democracy as usual.”