One coat with many threads – STIAS book launch by Abdallah Daar

“Martin Luther King’s dream is largely unfulfilled. The promise of globalisation seems to be coming apart. We need to talk about what we have in common rather than what divides us. We are one species with a common human destiny. Our common humanity is not a cliché but a fact – we need to apply it in our daily life.”

STIAS fellow Prof. Abdallah Daar was talking with Prof. Jimmy Volmink, Dean of the Faculty of Medicine and Health Sciences at Stellenbosch University at the launch of his new book, Garment of Destiny.

“A rising tide of polarisation plagues the world,” continued Daar. “There are alarming indications that our unique human fabric is unravelling. The book is an effort to renew King’s dream, to make the world a better place of shared human experience where we are all equal members of the human community.”

Abdallah Daar, transplant surgeon, scientist, bioethicist and global health expert, is a Tanzanian born into Swahili culture, with ancestral roots in Arabia, the Caucasus Mountains and Ethiopia. His memoir, infused with philosophical reflections and research, chronicles the exploration of his multiple identities, taking the reader on a journey to Russia, the Ottoman Empire, Zanzibar, South Africa, Idi Amin’s Uganda, London, Oxford, the Middle East, the USA, Canada, and beyond.  We meet slaves, royalty, heroes, Nobel Prize winners and murderers.  It is an impassioned call to resist the polarisation that is wrenching apart people of different ‘races’, cultures and religions. Inspired by Gandhi and Martin Luther King, Garment of Destiny is a remarkable journey that explores the many facets of identity, its formation and who controls it. Asking the question – are we who we are – or who we are as seen by others?

The book was commenced during Daar’s residency at STIAS in 2014 and opens with King’s Garment of Destiny quote. The book was completed exactly 50 years after King’s assassination.

Described by Prof. Volmink as “A beautifully written description of an incredible journey of an extraordinary man. An honest and entertaining account of personal struggles, history and lessons. Compassion flows through its pages. It contains important insights into his soul, his thoughtfulness, sensitivity, concern for fairness and justice, and compassion for people.”

One garment for one humanity

“I believe that there is no clash of civilizations,” Daar said, “because we have one human civilization.”

“It is one garment but a garment of many threads. We must focus on what unites us, rather than on what divides us. Sadly, politicians thrive on on using identity politics creating divisions in societies.”

“I believe my own mixed ancestry led me to try to understand differences.”

“It’s important that we have a deeper understanding of people and their history. I would like to start a worldwide movement where people meet in their neighbourhoods to tell their origin stories,” he continued. “It’s about increasing our understanding of the differences that make us what we are as well as the commonalities that bind us. No matter where we come from and where we call home we need to talk about the common threads that bind us. Home, after all, is usually the place of your latest relationships.”

”Addressing the question of anger and forgiveness, Daar said: “Anger can merge with hatred. When neighbours remember only the hate, they will often start thinking of revenge. But anger in itself, without hate, can be channelled to bring people together to find solutions.”

“When there has been serious pain and suffering, as happened in apartheid South Africa, it is very difficult to forget.”

“Forgetting can merge into forgiveness,” he added. “This is a long process for South Africans. The Truth and Reconciliation Commission was the first step but definitely not the end of the process. There is currently a deep wound being opened around the land ownership issue. It will take time and wisdom to reach a point where everyone feels they have had their rights recognised.”

“I hope the current President is able to take South Africa in a new direction.”

Of his own experiences of racism, he said: “Often the most useful response is not to react to every slight, but to always try to do better, to show you are just as good, if not better. People respond to excellence. In academic settings in particular people want to recognise achievement and repudiate inequality.”

“Academics have an important platform and must use it to influence young people. We need to embed our hopes for the future in the hands of the youth.”

The book is published by Barlow Publishing in Canada and the USA, and in all Amazon markets. It is available in book form and also in various e-book formats such as Kindle. In South Africa, copies are available online at Takealot and Loot or via Amazon. 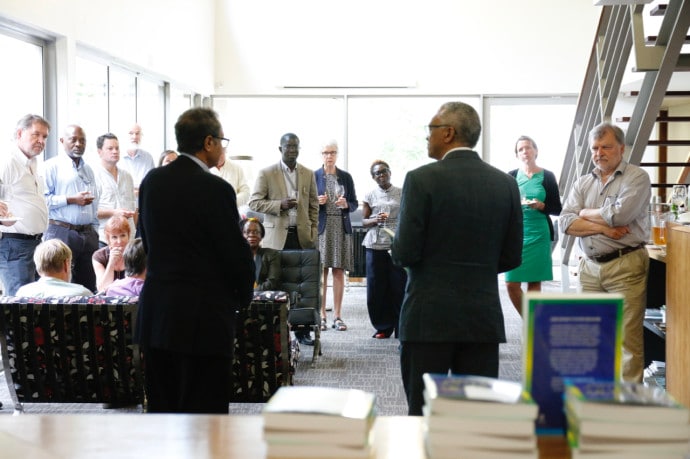