“When is a coup a coup? When is a war a war? Some call it a peaceful transition, but if there are soldiers shooting and forcing resignations that is a coup,” said Prof. David Moore of the Department of Anthropology and Development Studies at the University of Johannesburg. He was reflecting on recent events in Zimbabwe, trying to tie together their many threads for STIAS fellows. Moore’s talk was based on his 35 years of research in the country and specifically research carried out after the November 2017 coup and immediately after the mid-January 2019 protests and the Zimbabwean state’s vicious reaction to them. Prof. Moore’s work explores the multiple elements of the Zimbabwe crisis and the historical development of its political elite. 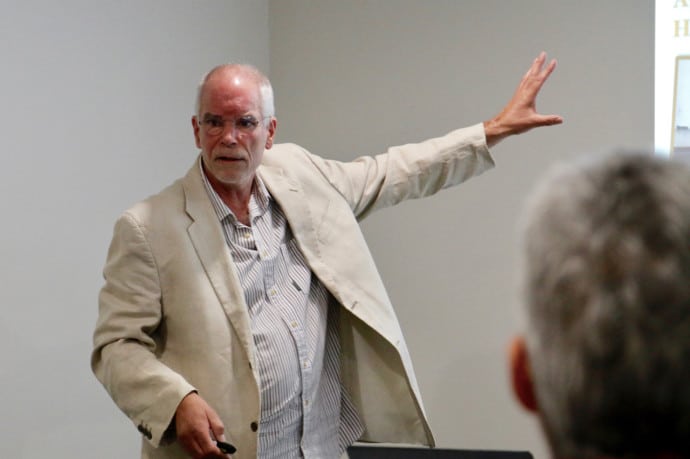 “In the middle of January, stayaways and protests – inspired immediately by a near tripling of the petrol price but rooted in months of unfolding economic and political crisis – resulted in a seemingly chaotic and complex series of events in most of Zimbabwe’s urban areas,” he said. “Well over a dozen people were killed: many, many more were beaten, raped and tortured. The looting of hundreds of shops, burning of taxis, and the taxing of travellers, accompanied the killings. But no one seems exactly sure who did the murdering, looting and raping,” said Moore.

“Chaos or calculation?” he asked.

“Many interpretations abound,” he continued, “ranging from ‘third-force’ theories to analyses of anarchy. The first is that the Emmerson Mnangagwa/Constantino Chiwenga régime planned it to justify an authoritarian crackdown on the Movement for Democratic Change (MDC), which refuses to recognise the legitimacy of the 2018 elections. The second is that unions and civil society activists jumped into the idea precipitously and without consultation and, from there, all parties (including military officers angry with their leaders, and opposite them the Presidential Guard) leapt in with their millions of different objectives.”

“However, there are many more perspectives in between,” he added.

Moore traced the events leading to the three recent military interventions in the country. The first was in November 2017 when a faction of Zimbabwe’s ruling party – Zanu PF – and soldiers removed the country’s 93 year-old president from power.

“Generation-40 was one of the recent factions contesting for Zanu PF’s leadership as it became clear that President Robert Mugabe’s demise was imminent,” he said. “Most were not in the liberation war, were generally wealthy, and pushed indigenous ownership, which was geared to the advancement of the aspirant black bourgeoisie. In 2017, the president’s young spouse Grace Mugabe displayed aspirations to inherent her husband’s throne and became the fly in their ointment. They had tried to ingratiate themselves with her, encouraging her tirades about the contending faction, but she took a step too far. At a rally in White City Stadium in Bulawayo on 4 November young people associated with ‘Lacoste’, the opposing faction named after the ‘Crocodile’ (then the Vice-President Emmerson Mnangagwa) booed at her. This led to Mnangagwa’s firing, his exile, and the subsequent battles between the police (associated with G-40) and the army, which was behind the plans to bring Mnangagwa back and ‘retire’ Mugabe. It is not known how many people died in this intervention, but it was quite likely far more than the one officially recognised.”

“On 18 November thousands of citizens demonstrated in the cities, supporting the military’s efforts to oust Mugabe. At one point many marched to State House to force Mugabe out precipitously, but they were stopped by the military, indicating clearly that soldiers were in control. At the same time, politicians from the ruling and opposition parties were hammering out the parliamentary process for impeachment. Mugabe resigned before the process could be completed.”

“Thus the word ‘coup’ was avoided,” continued Moore. “Some called it an ‘unexpected but peaceful transition’. The Southern African Development Community and the African Union accepted that explanation.”

“This was followed by the election on 30 July 2018 which supposedly confirmed Mnangagwa as president. The opposition group – the MDC Alliance – still refuses to accept the results. When on 1 August opposition supporters protested the slow ballot counting, at least six (including unknowing bystanders) – and probably many more – were shot by soldiers.”

“The events in January this year followed President Mnangagwa’s announcement of a gargantuan increase in fuel prices which led to protests and chaotic, uncontrolled killing and looting. The army commandeered people in their houses. There were mass trials and imprisonment of protestors.”

The three events have resulted in further losses in legitimacy and a worsening economic situation in the country.

“I believe these events have wiped out any trust people might still have had in the ability of the November 2017 coup makers to bring democratic and socio-economic rights to Zimbabwe’s long-suffering people,” said Moore.

“The history of Zanu PF is one of almost constant near-coups,” he added. “I can’t see how it will get any better. Mugabe’s shadow falls all over Zimbabwe’s history. He believed that with him gone Zanu PF would fall; that he was the only one who could keep the factions together. This might well be true in a sense. But the way he kept power was to manufacture and manipulate factions. He played them off and kept on top of this game for nearly half a century, going back to the liberation war in the 1970s. But when he lost the ability to keep on top of all of this subterfuge, the party imploded. We are seeing the consequences now.”

“The MDC has also been unable to capitalise on its popularity at its birth in 2000. The combination of Zanu PF’s heavy repression over two decades, and what many say is its immaturity and even corruption indicate that there is still a hard road to travel.”

Moore pointed to the land issue as a ‘festering sore’ in Zimbabwe alongside a degree of politicisation of ethnicity and the huge burden of near economic collapse.

“The economic situation is in crisis. The American dollars that are in the country – remember, in 2009 the Zimbabwean government dropped its then worthless currency and turned to a ‘multiple currency’ system that is, in fact, the US dollar – are not ending up in the fiscus,” he said. “Current efforts at reform are trying to eliminate the parallel currency markets to get the scarce dollars into the reserves. That there are ‘cabals’ in Zanu PF controlling much of this currency adds to the problem immeasurably.”

“Without drastic change I see increasing militarisation,” continued Moore, “unless aid packages or other ‘carrots’ are offered in return for the regime’s conciliatory moves. Increased military interventions mean decreasing legitimisation.”

“Even if the International Monetary Fund or Word Bank agree to assist there will be stringent conditions: huge numbers of the civil service would have to be fired or retired, for example. The conditions laid down by the international financial institutions would be strict indeed. It is becoming clear that Mnangagwa’s ‘open for business’ mantra is mythical.”

“What is very clear is that there is no golden thread in Zimbabwe. No straight line. It is a fraught and long process to free elections and deeper democracy.”

But Moore did point to some glimmers of hope.

“There is a youth transition in Zimbabwean politics. My hope lies with the young people – or, at least, some of them! The space is open. There is a crack in the wall that the MDC has failed to fill (but could, still) and Zanu PF is struggling to maintain its position. There are many young people in civil society. There are thousands of highly skilled professionals – including the technocrats who are trying to figure things out especially now, vis a vis the money situation. There is a bubbling tension. Most Zimbabweans are aware that theirs is a militarised, out-of-control state that cannot last.”

Whilst at STIAS Moore will be developing a theoretical and historically comparative analysis of coups, part of a book on the causes and consequences of the ‘militarily assisted transition’ in Zimbabwe.