“Coloniality is manifested at two fundamental but interlinked levels. The first involved the expropriation of indigenous worlds by imperial colonisers. Such expropriation included the corralling of indigenous peoples and their ecological spaces for the benefit of imperialism. It ended with formal independence, but the extraction and exploitation of indigenous worlds continues today through neoliberal capitalism and globalisation. Second-level coloniality involves the colonisation of the mind, patterns of knowledge and social structures of indigenous peoples,” said Sylvia Tamale, professor and coordinator of the Law, Gender and Sexuality Research Centre, School of Law, Makerere University, Uganda. Tamale was presenting the sixth STIAS public lecture of 2019 in which she looked at the ways in which Africa’s academies can break free of colonial legacies. 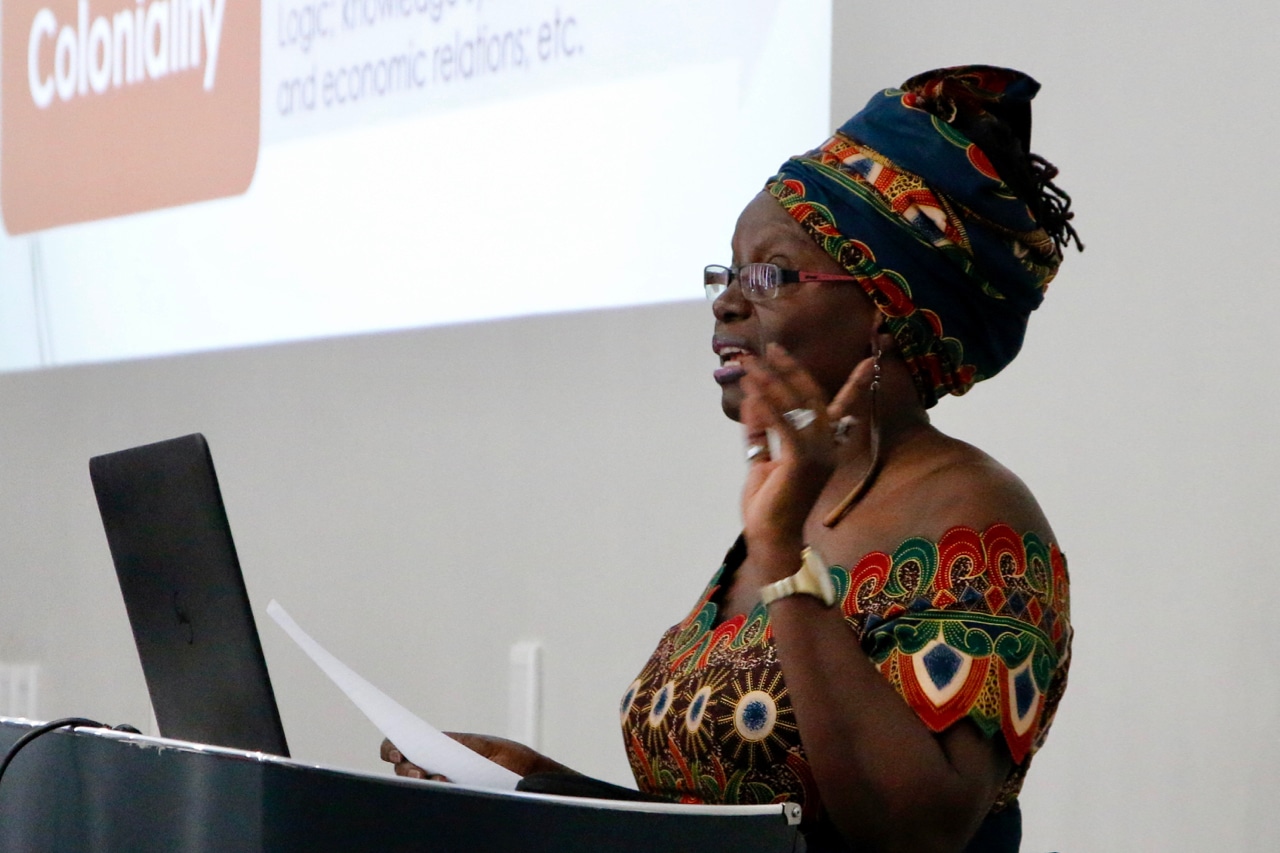 Tamale is currently a fellow at STIAS where she is working on a book tentatively entitled Decolonizing and Reconstructing Africa: An Afro-Feminist-Legal Perspective.

“Africa is a beautiful continent with vast human, mineral and natural resources, unique and diverse cultures and great, ancient civilisations,” she said. “Yet Africa is still dismissed in global geopolitics as a backwater of ‘shithole countries’. For too long our eyes were blinded, ears deafened, voices stifled, minds poisoned and histories erased by the ravages of colonisation and globalisation. Decolonisation and reconstruction must be taken very seriously.”

She stressed, however, that “we are not talking about a romanticised return to a precolonial past”.

“The globalisation of Africans is driving seismic shifts in global politics which calls for us to lend new urgency to this Africa-centred project.”

She started with an outline of overt coloniality which involved the expropriation of indigenous worlds, lands and peoples by the colonisers marked by watershed moments including the capturing of the first slaves in 1619 and the 1884 Berlin Conference which formalised claims to African territory, to its symbolic ending with independence in the latter half of the 20th century.

“However,” she said, “such ‘flag independence’ did not end the exploitation, oppression and violence of imperialism. The end of formal colonialism triggered the start of neocolonialism – new strategies to maintain colonial power which are, in many ways, more dangerous. Today Africa is indirectly dominated by neoliberal institutions such as the World Bank, the International Monetary Fund and the World Trade Organisation which yield significant power on the global landscape.”

“The hetero-capitalist system continues to extract from ex colonies, and post-colonial subjects and their environments are continually depleted at the hands of colonialists. Decolonisation calls for a dismantling of the capitalist neoliberal system.”

“However, it is the second level of colonialism that is much more insidious and dangerous,” she continued. “The colonisation of the mind – it operates in subtle and ‘benign’ ways, its ideologies inculcated through education, religion, law, family, language, corrupted cultural practices and mass media.”

“The appropriation of the world by the West continues via this psychological colonisation which shows us a world where everything Western is deemed superior, blurring our vision and restricting our potential to imagine a different world,” she added.

Tamale indicated that decolonisation, which calls for social transformation, “must target both levels of colonisation in order to be effective. It entails conscious resistant to internalised structures of thought.”

Tamale pointed to the layers or sub-systems of colonisation that need to be peeled away if we are to decolonise our institutions of higher learning.  These include addressing internalised colonialism, curriculum content, pedagogical approaches, the underlying research politics and inclusiveness of diversity.  She highlighted that this means that the institutional ethos must be seen to validate indigenous, alternative worldviews; that the curricula and pedagogy promotes critical learning and reflexive practices; that research politics do not assume the dominance of Eurocentric discourses; and, that there is true inclusiveness not just in demographics but in ensuring the quality of life of the people behind the numbers.

She pointed out that the structure and nature of academies and institutions of higher learning have been borrowed from colonial structures developed to commodify knowledge and produce elites. “African institutions adopted this complete with donated imperialist texts and the assumption that they would serve our needs.”

She highlighted some aspects of what a decolonised university or academy would look like.  These include the transformation of the ethos and culture; the production of historically and socially conscious graduates; replacing outdated bureaucracy and administrative practices and acknowledging diverse needs; the replacement of standardised testing, grading and purely quantitative rankings; the support of open access including grey and oral literature; and, the involvement of governments in actively improving education not merely responding to crises.

“The project of decolonisation recognises indigenous knowledge frameworks. Its purpose is to aid educators and learners, to lift the veil to uncover the legacies of colonialism, to search out ethics that reject domination and exploitation, and to critique outdated ontologies and epistemologies.”

“Curricula content has been deeply rooted in Western philosophical thought. Therefore curriculum development is a significant tool for the decolonisation process,’ she said. “It must be transdisciplinary, validate multicultural knowledge and produce learners with critical reasoning skills”

“Pedagogical approaches – how knowledge is imparted – cannot be overemphasised,” she added. “Teaching methods should be inclusive – validating the voices of all learners, promoting cognitive learning and resonating with the learners’ worldviews and beliefs.”

“As Paulo Freire tells us, students are not ‘empty vessels’ to be filled with knowledge from an all-knowing professor. Therefore, two-way learning is vital, as are techniques like story-telling, participative and community-based learning.”

“The use of indigenous languages as a medium of learning is crucial,” she continued. “Colonial languages alienate and silence many students.”

“We need to value, reclaim and foreground indigenous voices, recognise that there is no exclusive knowledge producer, and question and deconstruct the premise on which assumptions are based.”

“Peeling away only one layer leads to truncated decolonialisation,” she added. “We must be ready to shed familiar approaches and benefit from a cross pollination of ideas, values and perspectives.”

But Tamale admitted that it’s a huge challenge that goes beyond only higher institutes. “Six decades after independence no colonial state has successfully undertaken a radical overhaul of colonial education systems. Tanzania probably made the best effort but it still remains colonial. Curriculum restructuring must start at the primary level where the indoctrination and whitewashing begins.”

“Decolonising is a tall order,” she continued. “It’s a huge, daunting project. But a careful systematic programme has to be devised. It requires us to smash the pot and return to the river for fresh clay to mould a new pot. It requires re-centring, ‘re-humanising’, reconstructing and resisting, but decolonising will benefit the broader community and lead to a more just society.”