“Alzheimer’s Disease is a progressive, irreversible brain disease. It’s the main cause of dementia. It destroys memory, disrupts daily activities and usually causes death within 8 to 12 years. It’s the fourth leading cause of death in the United States in people over 65 and there are an estimated 40 million sufferers globally,” said Professor Carlos Ibáñez. 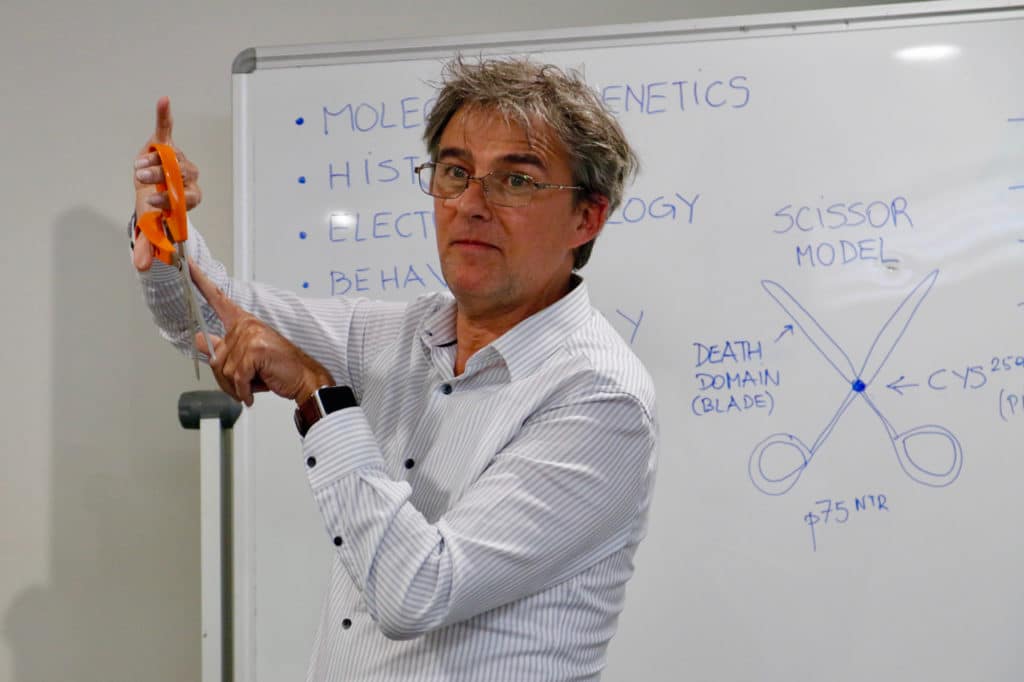 STIAS fellow Carlos Ibanez during his seminar on 24 October 2019

Ibáñez was presenting an update on his work on the neurobiology of Alzheimer’s Disease to STIAS fellows. He is a molecular biologist and holds double appointments as Professor in Neuroscience at the Karolinska Institute in Sweden and Professor in the Department of Physiology, Yong Loo Lin School of Medicine, National University of Singapore. Ibáñezis also a member of the Nobel Assembly and Nobel Committee for Physiology and Medicine, and member of the European Molecular Biology Organization.

Recognised risk factors for Alzheimer’s Disease include genetic factors, social and environmental factors including education and nutrition, as well as the presence of other conditions including head injury and diseases like diabetes and vascular diseases.  There is no vaccine and no cure – most treatments are aimed at alleviating the symptoms.

“The cerebral cortex and the hippocampus shrink, and there is loss of neurons.”

“The presence of amyloid plaques is the defining feature of Alzheimer’s Disease,” he said.

“Alzheimer’s Disease is widely thought to be driven by amyloid pathology,” he continued, “in which peptides of amyloid-β are generated in the brain and clump together into plaques which trigger inflammation and degeneration.”

The problem is though that there is good evidence that Alzheimer’s Disease starts about 15 to 20 years before it is symptomatic and therefore diagnosed. “The amyloid plaques generally start to form very early – usually up to 15 years before any obvious symptoms,” said Ibáñez. “At the time of diagnosis patients already have the maximum amount of plaques in the brain – at this point, the system starts to fall apart. If we could get a therapy that removed the amyloid plaques before any cognitive impairment occurs that would be ideal.”

Identifying the neuronal cell receptors and understanding the genetic mutations linked to Alzheimer’s Disease and how to manipulate these genes would be an important step forward and is the basis of the work being done in Ibáñez’s laboratory. They are conducting genetic, electrophysiological and behaviour tests in mouse models. Using these models they are hoping to determine the role of specific cell receptors linked to neuronal damage. They are changing or removing parts of receptor genes to see if this results in less production of the amyloid plaques.

“By blocking certain receptors or changing how they work we might be able to alleviate some of the symptoms,” he said.

Their models are specifically looking at manipulating the gene encoding for the p75 neurotrophin receptor (p75NTR). Receptors are proteins in the membranes of cells – they act like antennae sensing other molecules in the environment which cannot by themselves cross the plasma membrane. p75NTR is a receptor in the membrane of neurons and its overactivation contributes to the loss of synapses and neurons.

“p75NTR is a ‘death receptor’,” said Ibáñez. “It’s a transmembrane protein present on the surface of a variety of cells, including neurons, that mediates the elimination of defective cells by instigation of so-called ‘cell death’ pathways. p75NTR expression and activity is induced after lesions and neural damage, thus contributing to neuropathological effects in a variety of conditions. Interest in p75NTR biology stems from the possibility of blocking p75NTR activity as a strategy to combat neurodegenerative conditions, including Alzheimer’s Disease.”

However, receptors can have both good and bad effects, so the challenge is in identifying which part of p75NTR needs to be inactivated or jammed. Ibáñez used the metaphor of a pair of scissors and pointed out that the current work is trying to determine whether the blades or the pin holding the blades needs to be jammed. They are looking at mice models where the entire receptor has been inactivated as well as mice in which only parts of the receptor are inactivated.  Memory and learning tests are then conducted on the different mice.

“Initial work seem to indicate that removing pieces is more effective at reducing amyloid plaque formation than removing the whole gene,” said Ibáñez. “It seems to be better to have an inactive receptor than no receptor at all.”

“Developing drugs that would work in ‘jamming the scissors’ and stopping the receptor may be a possible approach to treatment,” he added.

But he was quick to point out that this is very early preclinical work and such a drug would be a long way away. Trials for other treatments for Alzheimer’s Disease and prevention strategies have thus far largely failed. One of the challenges is that, because symptoms take so long to develop, people are recruited to trials late when there is already too much damage – “You won’t reverse a brain already full of plaques,” said Ibáñez. Many of the tested drugs have also had side effects which have further reduced quality of life.

But Alzheimer’s Disease is exacting a huge toll and the ongoing work is absolutely essential.

“People are living longer and old age carries an increased risk of dementia, a condition that is so far neither preventable nor curable,” said Ibáñez. “The trend of incidence of Alzheimer’s Disease is increasing all over the world – doubling every 20 years – at huge cost to society.”