“I’m aiming to come up with solutions to the problems of cardiovascular diseases which cause high mortality in the developing world by looking into ways to make treatments cheaper, more efficient and accessible to most patients in the poorest corners of our planet. In essence, we need an ideal vascular graft for surgical applications that provides a solution to the limitations of current biological and synthetic grafts.” said Jerry Ochola, Senior Lecturer at Moi University, Kenya. Ochola is a member of the fifth cohort of Iso Lomso fellows which he described as “an honour and a great opportunity to move my research forward”. He presented the fifth STIAS public lecture for 2022. 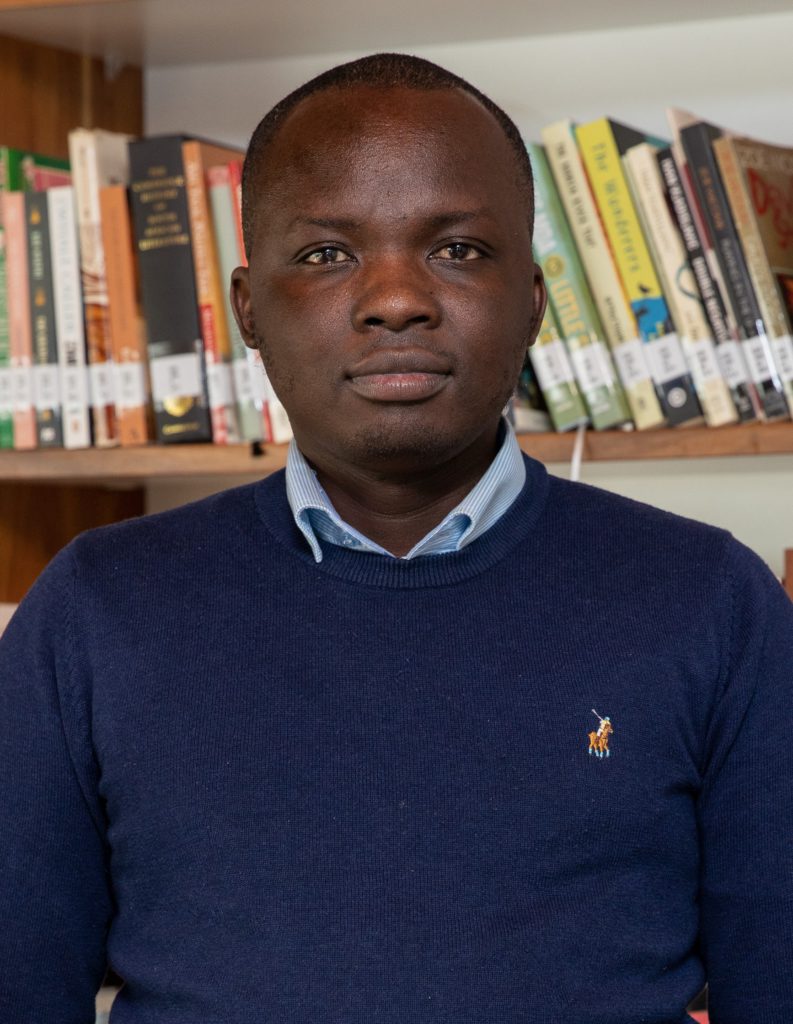 Ochola holds a PhD in Materials Engineering from Ghent University, Belgium and has held postdoc fellowships as an Africa Research Excellence Fund Fellow at the University of Cape Town and also as a Committee for International Co-operation and Development Fellow at the University of Pavia, Italy. He is a member of the fibrous structures standards committee at the Kenya Bureau of Standards and previously worked at the Kenya Industrial Research & Development Institute.

He explained that cardiovascular diseases (CVDs) are non-communicable diseases caused by the build-up of plaque in the lining of the arteries (atherosclerosis). This blocks and weakens blood vessels and damages valves “affecting the whole vascular system and the essence of blood flow”.

Decreased or blocked blood flow can affect all the major organs. For instance a blockage to the carotid artery will disrupt blood flow to the brain often leading to stroke, when the coronary artery is affected blood flow to the heart is disrupted, this can cause heart attack, while in the peripheral arteries damage or blockage will affect blood flow to the limbs which can lead to loss of a limb or loss of the use of limbs completely.

“The misconception is that CVDs are diseases of the wealthy,” said Ochola. “CVDs affect humans in the poorest corners of the universe as well. They are linked with inactivity, smoking and poor diets. All of which are found in the developing world. They affect everyone, from all parts of our society.”

Ochola pointed out that according to data from the World Health Organization in the year 2019, non-communicable diseases caused 71% of overall global deaths with 77% of these in the developing world. CVDs are a major cause. “In 2019, 17 million people under 70 years of age died, 32% were due to CVDs.”

But mortality is not the only problem. Costs of caring for patients with CVDs are high “an estimated $434 (ZAR 7,701 or KES 52,288) – per person per day” – which is way too high for many people in developing countries.  Most of the cost is due to the expensive medical procedures, which includes cost of implants such as vascular grafts used to replace damaged blood vessels.

Ochola explained that for vascular diseases, the use of autografts is the preferred treatment method. This is due to autografts ensuring long-term revascularisation after implantation, long-term patency (often up to ten years), better survival and fewer additional cardiac events. However, autografts also have drawbacks which makes them unattractive to vascular surgery, “in that they require invasive harvesting and sometimes the available tissue is not suitable or insufficient.  Furthermore, it’s time consuming and expensive to harvest tissue and fabricate these grafts– ideally you want grafts available off-the-shelf, ready for implantation,” said Ochola.

Consequently, to overcome the limitations of autografts, synthetic vascular grafts are used as alternative grafts in the treatment of vascular diseases. In this regard several methods have been used to design and fabricate synthetic grafts. Nevertheless, synthetic grafts have still shown design and performance limitations that have occasioned higher failure rates during their use, especially in small vessels under 6 mm.

One of the most promising options is polymeric electrospun grafts. Electrospinning is a process in which ultra-thin, multifilament nanofibres are created by spinning and manipulating jets of electrically charged biodegradable polymers in an electromagnetic field.

“The ideal approach is electrospinning,” said Ochola. “Electrospun vascular grafts have the ability to mimic biological grafts. Further, they have improved mechanical properties, suitable tissue regeneration and performance which is much closer to autografts. However, their inherent properties still need to be optimised to boost their seamless adoption as vascular grafts.”

“Even though polymeric electrospun grafts are a viable option they have limitations in their design in terms of properties such as: surface topography, mechanical properties, cell proliferation and cell growth potential. The design of ideal synthetic grafts involves creating realistic models with optimised properties and performance.”

And this is where computational modelling can assist.

Ochola explained that current designs and in-vitro tests on grafts are mainly based on solid three-dimensional (3D) structures which does not consider their morphology. His work proposes use of Python Programming. Python is a programming language for parametric modelling using libraries based on Numerical Python (NumPy) which offers a comprehensive mathematical functions to model structures by defining the dimensions of the base module at the micro-and macro-scale level in a 3D domain.

“The development of electrospun graft models at nanofibre level would be more realistic for in-depth investigation of their performance and integration as vascular implants. This project aims to use 3D computational modelling and a Finite Element Analysis (FEA) approach to design and characterise tubular electrospun polymeric grafts at nanofibre level in python®, and simulate the in-vitro mechanical deformation and performance using commercial Finite Element (FE) software-ABAQUS®/Explicit.”

Among the problems Ochola predicts computational modelling can address are optimising fibre diameter and pore size distribution at nanofibre level in electrospun structures, allowing for more uniform fibre distribution within the structure for better performance as vascular grafts.

“The results from the 3D tubular graft models will be used to compute displacement, uniaxial forces, and stress-strains levels in the structures. This could help to produce a structure which is close in performance to the biological (autograft), which is efficient, cost-effective and available to most patients.”

“I hope this research will provide designs of tubular electrospun vascular grafts for application in surgery.”