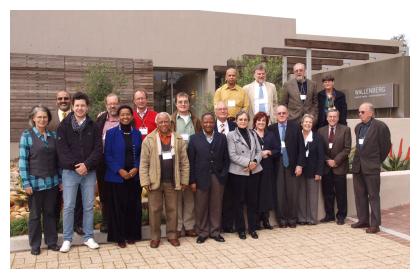 On 22 and 23 July a number of deeply rooted issues affecting society will come under the spotlight at a symposium on “Towards a New Humanism” held at the STIAS Wallenberg Research Centre. About twenty South African participants have been invited and will be joined by a number of colleagues from abroad. The symposium is planned as a STIAS consultation expected to develop into a full-scale STIAS project with John de Gruchy as project leader. Participants from abroad include William Schweiker (Chicago), Harry Kunneman (Utrecht; also a STIAS fellow) and Ebrahim Moosa (Duke). Among the local participants are Denise en Laurie Ackermann, SU Rector Russel Botman, Farid Esack, Antjie Krog, Neville Alexander and Njabulo Ndebele, former Vice-Chancellor of UCT; Alexander and Ndebele are also STIAS fellows.

A quotation from John de Gruchy’s opening statement for the symposium sketches the parameters for the discussion: “We are fully aware that the task ahead of us has to be understood in relation to the historical context, both local and global, in which we live. I stress the connection between the local and global because it is now self-evident how much these are inextricably bound together. That is also why it is so important and good that we have amongst us friends and colleagues from contexts other than South Africa. Inevitably our focus will be more specifically on our own country, but our hope is that our discussion will not be parochial or insular in its scope and character.”

“Despite the termination of legislative apartheid and the strides that have been taken towards reconciliation and nation building, the legacy of apartheid continues to manifest itself in ways that threaten the future of South Africa. Not too far from where we are sitting in this splendid complex are people living in squalor, trapped by poverty exacerbated by the failure of service delivery, appalling housing, children unable to obtain a reasonable education, the prevalence of disease and violence. The catalogue is too well-known and perhaps too uncomfortable for the comfortable for us to dwell on too long. But this is the dehumanizing reality that casts its long shadow over our deliberations. And, of course, the dehumanization of those trapped in poverty has its mirror image amongst those that are differently dehumanized by affluence, privilege and the abuse of power.”

“Let us acknowledge at the outset what is self-evident. We who gather here are not representative of the demography of South Africa or the wider world and, if the truth be acknowledged, we are mostly “senior citizens.” There are none present to represent the anger and bravado of youth, none who have been on strike these past weeks, none suffering from HIV & AIDS. We are privileged, well-educated, and financially secure even in these times of economic downturn. In fact, we may well wonder whether we have anything to say, any contribution to make to the issues that confront us. But we know that we cannot simply sit back in such a time and abnegate our responsibility for future generations and therefore for doing what we can now within the limitations that define us. We also know that we have a wealth of collective experience, a wide range of knowledge and a fair dose of wisdom, and at least a willingness to make a contribution to the humanization of our society. We also bring to the table a significant range of social experience, academic disciplines, and perspectives that, combined together, are potentially significant.”

“There is a widespread view in South Africa that some of those constituencies that were deeply engaged in the struggle against apartheid withdrew from public life once the battle was won. Examples usually given of such withdrawal are the churches and ecumenical organizations such as the South African Council of Churches. But there is also the widely held view that academics and intellectuals who were previously at the forefront of public debate and protest withdrew with a sigh of relief in order to pursue their own scholarly interests in the relative peace of post-apartheid South Africa. There is truth in these accusations, even though there is also much by way of caricature. But however we assess them, we fail to appreciate such accusations if we do not hear in them a cry for intellectuals to fulfill their public role with renewed vigour even if our contribution to transformation may be a modest one. In responding to this challenge today, we also recognize that we stand in a long tradition, in South Africa as elsewhere, of those humanists who have contributed to the well being of the world in previous generations. We may be in search of a new humanism, but it is rooted in a distinguished genealogy.”

With this symposium and the expected longer term project STIAS is looking forward to live up to its motto of “research of the highest relevance at the highest level.” (Photo: Jannie Hofmeyr)