In an article that appeared recently on the website of Public Books titled ‘The Triumph of Afrikaans Fiction’ STIAS fellow Derek Attridge recounts his reading of well-known South African author Marlene van Niekerk’s novel Agaat. The opening paragraphs of the article appear below, followed by a link to the full article.

The Triumph of Afrikaans Fiction, by Derek Attridge

I’m reading one of the great novels of our time. I’m doing so slowly because it’s in Afrikaans, and although I learned the language for many years in South African schools, that was a very long time ago. The novel is Agaat, its title both a proper name (Agatha) and the Afrikaans word for “agate”; the author, Marlene van Niekerk, is a leading Afrikaans poet as well as novelist and short-story writer.1 Luckily, I have at hand the superb translation by Michiel Heyns, the version in which I first encountered the novel.2 A film of Agaat is said to be in preproduction, but however successful it turns out to be, it will be able to convey only a glimmer of Van Niekerk’s achievement. 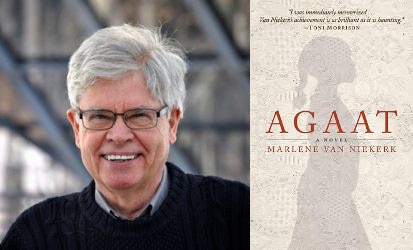 The origins of Afrikaans lie in the contact at the Cape of Good Hope among Dutch settlers, slaves from the Dutch territories in the East, and indigenous peoples, a creolization process that began in the late 17th century. A standard version of Afrikaans was established during the last third of the 19th century, partly in opposition to the dominance of English, and in 1925 it displaced Dutch as one of South Africa’s two official languages. With the triumph of the National Party in 1948, it became the language of government and thus of apartheid, a stigma that still attaches to it in many minds.

However, of the 7 or 8 million people who speak Afrikaans as a first language, more than half are what the apartheid classifiers termed “coloured” (that is, “mixed race”) peoples, whose variety of the language, sometimes called “Kaaps,” was dismissed by the upholders of the idea of a “pure” Afrikaans during the apartheid era.3 There is not yet a substantial body of literature in Kaaps, in spite of the pioneering work of Adam Small, but the recent poetry of Nathan Trantraal and Ronelda Kamfer shows how rich a resource the language offers.4

Derek Attridge presented a seminar during his STIAS residency on translating works of literature.