Disability is sexy: examining the ‘hidden’ issue of disability and sexuality in the African context – Fellows’ seminar by John Ganle

“What does it mean to have a physical disability as a woman and to want to be loved, to have sex, to be in a fulfilling sexual relationship, to be married, to reproduce and have children in a context like Ghana? What social and health-system constraints do disabled women face in realising their sexual and reproductive desires and rights?” asked John Ganle of the Department of Population, Family and Reproductive Health, School of Public Health, University of Ghana.

Ganle, who is one of the first cohort of Iso Lomso STIAS fellows, was discussing findings from his research which highlights how disabled women experience and negotiate barriers to sexual expression in Ghana and how they are expressing and/or re/claiming their sexual identities and reproductive rights in ways that problematise societal expectations around disability and sexuality.

He pointed out that persons with disabilities constitute 15% of the world’s population but remain one of the most marginalised groups, especially in low-income settings in Africa.

“The most-recent census estimated that 7 to 12% of the adult population in Ghana had some form of disability with physical disability being the highest across age groups.”

“Persons with disabilities generally have poorer health, lower education, fewer economic opportunities and higher rates of poverty. Disabled women, in particular, are more likely to be poorer and have lower socio-economic status. In the context of sexual, reproductive and maternal health, they have been ignored in research and programming in Africa. Such neglect has resulted in both poor theorisation of disability and reproduction, and a missed opportunity to understand the sexual, reproductive and maternal healthcare needs, healthcare-seeking behaviours, and challenges of disabled women.”

His research, which has encompassed both a systematic and realist policy reviews, has used diverse qualitative and quantitative methods including focus groups, interviews, photo-voice techniques where informants film their experiences, storytelling, memoirs and biographical narrative.

“Such work is urgently needed to better understand disability and reproduction in Africa, and to develop more inclusive sexual, reproductive and maternal health services that have the potential to propel progress towards the SDG objective of universal access,” he said.

“There is a clear evidence gap,’ he continued. “As well as a theoretical problem in that most of the evidence and thinking comes from a Western perspective and is very scanty in the African context. We need to properly understand these issues from an African perspective.”

However, the initial challenge proved to be accessing people with disabilities.

“It’s something people don’t talk about,” said Ganle. “You might not even know these people exist in families and communities. You have to bypass the shame, their confinement and, often, gatekeepers to do research. In two years we managed to talk to 127 people and surveyed 210 which, ultimately, is a good sample size for disability studies in Africa – but it was the hardest work I’ve done in my life.”

“We started by contacting disability associations – about two thirds of the sample was identified from their databases – from there we used snowballing.”

The sample included women of reproductive age (15 to 49 years) and the range of disabilities included physical, visual, speech and hearing, epilepsy and albinism.

“Albinism is interesting. Historically, it wasn’t classified as a disability in Ghana but there is huge stigma plus a connection to rituals and use of body parts for wealth or power rituals.”

“The research was carried out in Northern Ghana which has been a hotspot of tribal conflict and also an area of opposition to polio vaccination,” added Ganle. “It’s also an area of relative religious conservatism and where polygamy is practiced – all factors which may influence sexuality and reproductive health.”

Among the areas which the research to date has highlighted are a high rate of unmarried disabled women (27% of the sample had never married) as well as higher divorce figures – 9.1% in the sample versus 4.7 in the overall population. Physical violence had been experienced at a rate three times higher than the general population. Sexual violence was also high – of the 178 who responded to these questions, 35.4 reported a non-consensual first sexual experience and 20.8% reported a violent first sexual experience.

“Disabled women are seen as easy targets for sexual exploitation and violence and, as one respondent said, ‘When you complain you are ignored’.”

“This is obviously of concern because of the links to risky sexual activities like multiple sexual partners, unplanned pregnancies and contracting sexually transmitted infections,” added Ganle.

“15.3% of the sample reported having some form of same-sex relationship and some referred to being a ‘side chick’ in relationships with married men. In such a conservative context this might be deemed as transgressive sexual expression.”

But beyond just figures, the women expressed problems in expressing and navigating their sexuality.

“Constructions of disability and sexuality are definitely different for women,” said Ganle. “Physical appearance and a whole body is the starting point for sexual expression. Women suffer more than men in this regard. As one respondent put it ‘Who wants a woman who can’t wear heels?’.”

“There are also fears about reproducing a child with similar disabilities and in this the whole family is seen as contaminated. In addition there are doubts about whether a disabled woman can care for a baby and some expressed that if you can’t look after a baby you shouldn’t have one. How can one lay claims to reproductive rights if you are perceived not fit to do this?”

“On a physical level there is a lack of mobility to move around and meet people which sometimes limits relationships to other disabled persons.”

The physical aspects remain hugely challenging even within the healthcare arena. Using the photo-voice technique the women filmed their challenges in accessing even basic health services.

“The 2006 Persons with Disability Act stipulated access to healthcare plus the training of healthcare workers to deal with disability,’ said Ganle, “but this has not been enacted.”

“In an era where universal access is the buzzword this is shameful and we have to look at the possibilities of expanding justice for people with disabilities.”

“We have managed to get a small project funded by the USAID Systems for Health to assist in making infrastructure alterations to allow disabled access at some facilities and hope to expand this further.”

In discussion, Ganle pointed to the socio-economic dimension. “Economics are important,” he said. “even determining whether you are considered disabled or not in the first place. Class is probably a more fluid area in Ghana and I’m not sure about the influence of ethnicity.”

He also highlighted the challenge of thinking beyond the health discipline. “There are interesting data from the work which don’t fit within the health discipline,” he said. “There are definitely aspects specific to the African context. We have to engage more deeply in social theory and sociology to understand this fully. There is a challenge in packaging the information to develop an alternative way of looking at disability in Africa.”

“There is no doubt that we need to have conversations about disability, sexuality and reproductive health rights. We need community voices and, hopefully, to change stigma by increasing their visibility.” 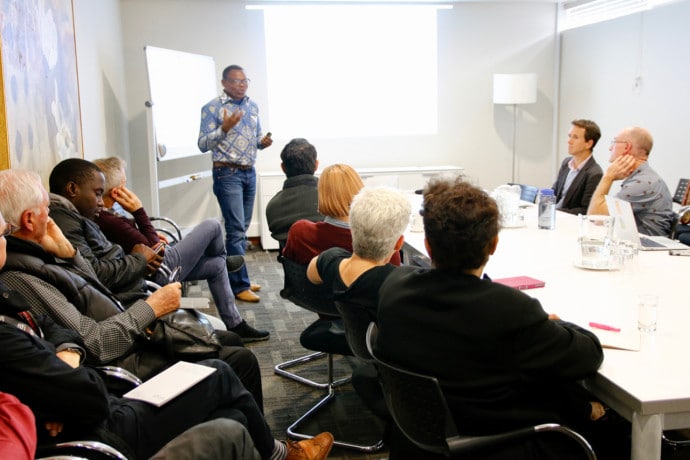