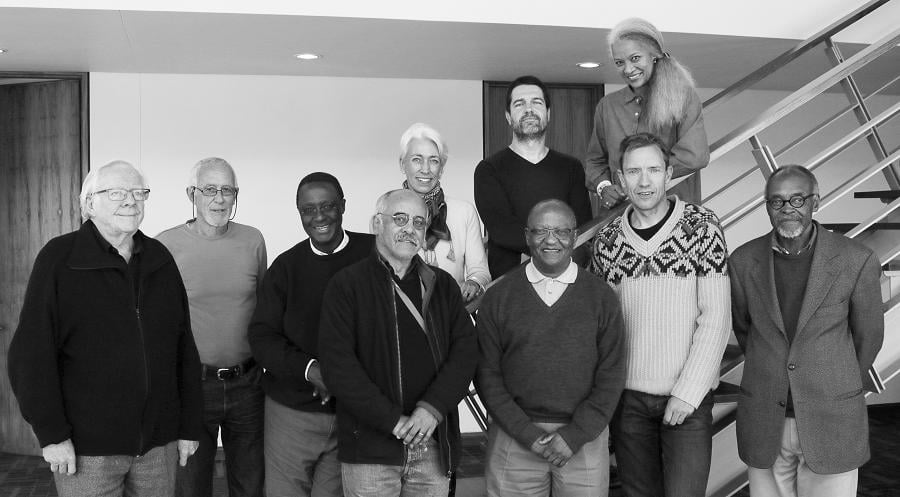 “Our new future must suffocate racism – racism must not continue to suffocate people,” said Prof. Njabulo Ndebele, Chancellor of the University of Johannesburg, former Vice-Chancellor of the University of Cape Town and current chairman of the Mandela Rhodes and Nelson Mandela Foundations. Prof. Ndebele was speaking at a seminar at the Stellenbosch Institute for Advanced Study (STIAS) where he is currently a Fellow and member of the STIAS Effects of Race project. This project aims to address major gaps in knowledge on race thinking and racialism, explore theoretical problems in race thinking and look at practical steps towards mitigating the effects of racism. The project is informed by the need for further research and reflection on race, especially in the context of contesting visions for a democratic South Africa. The project involves a core group of 11 scholars.

Referring to the Rhodes Must Fall movement, Prof. Ndebele described it as a “return to black consciousness – the ideas of Steve Biko and Frantz Fanon”. He added, however, that it requires deeper understanding of the position of a black person in South Africa today.

“Twenty one years into democracy there are black people – in positions of authority and students – who still feel uncomfortable as black people in their own country,” said Prof. Ndebele. “This makes little sense given that South Africa is a ’black’-run country. This focus on race seems to put ‘black’ people on the defensive as continuing victims. There must be a sense radical agency that turns the tide.”

“Race cannot continue to be the basis on which to fight the good fight. It must give way to something much bigger and has more prospects for freeing the human potential of all South Africans,” he added.

Referring to a lecture he gave in 2014 entitled ‘Goodbye Sandton. Hello Soweto’ Prof. Ndebele referred to the irony that the short (20-minute) journey between Soweto and Sandton is actually a journey that started in 1884 in Berlin when European powers carved up Africa into their respective possessions. Since then “Africa has never been the same”.

He pointed out that the story of Africa, and South Africa in particular, is one of “conquest, dispossession and dislocation of hundreds of thousands of people who were driven out of the socio-economic milieu to become workers – a source of labour” and “this still remains and shapes the narratives of struggle”.

“The chief representatives and implementers of British imperialism and colonialism in Africa were such people as Cecil John Rhodes and his friends. Today, as his statue falls, the irony is that his economy is still rising,” he said.

“Whiteness in South Africa is encoded in lived life – in laws, in the built environment and in every significant sphere of organised public life. The dilemma of the black elite in this situation is that they find themselves participating in a system, still deeply entrenched, that was created by whites working in what has been for them a profitable economic system which has deployed conquered peoples around the world in its service, and, in the process, also produced racism on a global scale. ‘Whiteness’ keeps getting recruits,” he said.

“The real strategic alternative to whiteness in South Africa is not blackness; it is rather in common citizenship and in multi-ethnic and cosmopolitan interaction that has taken over a century to begin to reveal the makings of a national identity.”

“When people came from all over the sub-continent to work in the mines and factories of South Africa they became different people – cultures changed, languages changed, they intermarried,” he continued.

“This cosmopolitanism and multi-culturalism is the basis of a new story,” he added. “There is a strong rationale for non-racialism as embodied in our constitution. But non-racialism’s best expression is in common citizenship and in a homegrown multi/inter-ethnic and inter/multi-cultural experience that now requires the backing of state resourcefulness to consolidate. Ethnic and cultural categories have become porous over time. In this regard, recent evidence of ethnic thinking is a matter of serious concern. Notions of ‘whiteness’ and ‘blackness’ become simplistic against the formidable challenge of creating a new nation.”

He also added against this background that “the future of South Africa is tied up in what we do with the townships which are still largely dormitory settlements that still export labour to the main white suburbs. Townships, where the overwhelming number of South Africans live, must support more complex livelihoods over time.”

“The Truth and Reconciliation Commission (TRC) focused reparations on those people who came forward as victims of individual gross human rights violations,” he said. “While this may be understandable in the context of the TRC, real reparations lie in a new state developing the energies and talents of the vast majority of people who were the targets of systemic exploitative capitalism. How does the post-apartheid state change the lives of millions of its people?”