What do we wish to change with regard to race, racism and racialism? Fellows’ Seminar by the ‘Effects of Race’ group

“The project faces a daunting challenge. What can we possibly say that is new about race in South Africa and will make a difference in the lives of people?” said Nina Jablonski, project leader of the STIAS Effects of Race (EoR) Group. Jablonski and members of the EoR core group were updating STIAS fellows on the project’s progress.

“The aim is to develop new scholarship that might influence policy makers,” continued Jablonski. “To think deeply about topics that might be of benefit to them.”

The project was conceived in 2012 as a part of the STIAS theme ‘Being Human Today’. The goal is to inform social change through challenging and undermining existing notions of racial difference. The aim is to address gaps in our knowledge on race thinking and racialism, and to reflect on the future especially in the South African context. In this presentation, the group presented a summary of discussions on their 2017 theme which consisted of three questions, “What do you wish to change with regard to race, racism, and racialism? Why? How would you bring this about?”

“Group members’ answers to these questions have been, on the one hand, highly diverse and, on the other, remarkably similar,” said Jablonski. “They stress how lives and societies have been deformed by the use of the words, ‘race, racialism and racism’ and that the overwhelming aspiration is to live in a society that resists being described by those words.”

“I don’t want my grandchildren to determine themselves as the opposite of other people,” said Njabulo Ndebele. “I don’t want them to have a life that aspires to prove itself.”

In the seminar the group discussed issues surrounding race, racialism and racism in South African by focusing on the South African Constitution and specifically, how contemporary politics and social values have failed to fulfil the promises of social equality enshrined in the document and how these promises may be re-inscribed; new biological and social understandings of race, and how these are changing the perceived boundaries between races, sexes, or sexualities; and, time, which is a necessary requirement for fundamental change.

“The development of the South African Constitution was an astonishing event to witness in one’s lifetime. It had incredible symbolic value. It provided a vision of what the society should be,” said Gerhard Maré. “Under apartheid discrimination was about creating inequality. Now racial classification is claimed to be towards creating an equal society.”

“The Constitution, the Judiciary and the Constitutional Court are among the few things in South Africa that are working,” added Göran Therborn. “It can still be held up as a vision of the society we want to have and to be.”

“The Constitution is the jewel in the crown,” he continued. “It added substantial rights and equalities, and the Constitutional Court has made many of these rights justiciable and provided some solutions to inequalities.”

“Unfortunately, South Africa remains one of – probably the – most unequal society in the world,” he continued. “Inequality within the Black South African population is now equal to overall inequality in India and China. South Africa is a laboratory of inequality and racialism.”

“The representivity of Blacks in power overshadows other issues but inequality is systemic,” he continued. “Is this an effect of race? No, the main cause is settler colonisation, enriched by mining capital, conquering and ruling a well-populated territory.”

Therborn added that early childhood inequalities in nutrition, living conditions and education are not irrelevant and become handicaps across the individual’s life cycle.

“But,” said Zimitri Erasmus, “an unequal world shapes but does not determine an individual.”

“Our biological make up is flexible, fluid and responsive to social contact,” she explained. “Biology becomes politicised when patterns of inequality shape it over time.”

“As sentient beings we don’t live lives along straight lines,” she added. “The path is full of knots and angles.”

“Human origins have been subject to biological remodelling,” continued Jablonski. “The human gene is ever changing and responsive to environment and circumstance. This has given us liberating insights into the fluidity of the human condition.”

“There is a long tradition in social science of trying to make sense of race,” said Crain Soudien, “something we as human beings have made up.”

“The myth of race isn’t something to run away from,” he added. “Our genes matter but not as much as they did before. What we are today is messy but it has always been a story of messiness.”

Continuing on this theme, Jablonski added: “For biologists and palaeontologists there is nothing divine about our origins. For the past 4 million years hominids have gone through cycles of intermingling. It’s a messy braid of interconnections – no single origin – a cloud, not a straight line.”

“Our vision of humanity is what it always has been but not what it has been labelled,” she continued. “Racism is a particular distortion. There is a pernicious history of communications that perpetuated a racial framework. I believe we have a responsibility to bring to light the long history of taking cognisance of visual differences among people. We need to understand what we have done to ourselves. We have dug ourselves into a cognitive hole that we need to get out of.”

Jablonski pointed out that the span of African continental history shows continuous movement with some conflicts but mostly day-to-day intermingling, and that racialism was artificially crystallised 150 years ago.

“If we look back at the history of the continent, Africans intermingled freely. They achieved a porousness and embraced each other’s languages and traditions,” added Ndebele.

Turning to the future, he added: “I believe there is a possibility for a new kind of human norm in the South African environment.”

“In the townships today people envision a future that is self-sustaining and self-determining even in those stressful settings.”

But the group acknowledged that the wounds run deep, and racism and apartheid was an injury to the most basic aspects of being human.

“We often gloss over the transformation from a white-settler nation to a post-colonial, multi-racial nation,” said Therborn. “You are living through a very unique historical experience in this country. No wonder it has caused problems and tensions. It will need a great deal of time to heal.”

“You can’t fix problems by adjusting an old problem,” added Soudien. “You want to get rid of the problem completely. For example, something like affirmative action is a rough way to fix a problem – we have to ask what the other ways of dealing with it might be.” 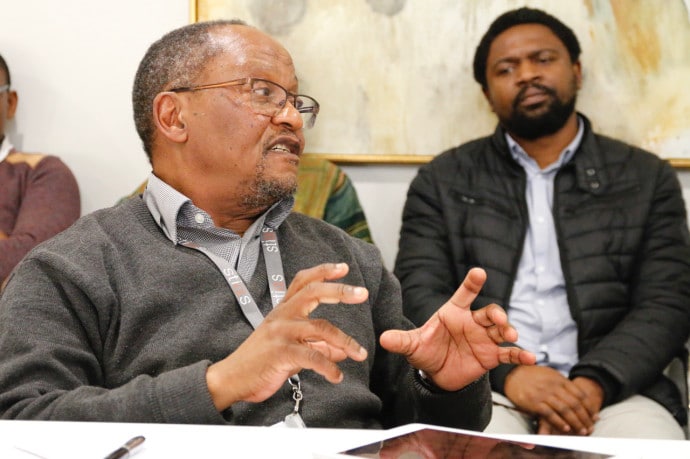 “South Africa is a culture bed for things that manifest in the rest of the world. A lot has happened here and we need to make sense of it,” concluded Soudien. “South Africa is part of global processes but also special – a very distinct human expression of self happened here. The precolonial history carries on into the present.”

“South Africa is an important place to get your head around,” he added.